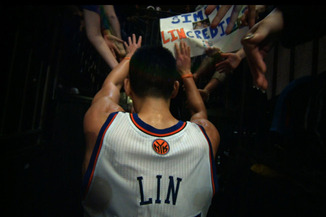 Jeremy Lin caused us to launch prematurely. We had a date in mind for Beijing Cream’s debut — February 21, for reasons that now elude me — but Lin began tearing it up in New York earlier in the month, and I just couldn’t sit on Linsanity. Who could? Five of the first seven posts that appeared on BJC were about him. (All of them except this one completely sucked, but that’s beside the point.)

I bring this up because Lin, a year after setting the US media capital ablaze, finds himself back in the public conversation for something other than sports. The world premiere of a documentary about his rise, Linsanity, received a standing ovation from viewers at Sundance on Sunday, as Los Angeles Times reports:

“Linsanity,” the documentary about the rise of unlikely NBA point guard Jeremy Lin, premiered in Park City to rousing response, easily making it one of the most crowd-pleasing documentaries to play the festival this year. Sports fans stood up and cheered, while a coach said he thought it should be mandatory viewing for high school athletes.

Director Evan Jackson Leong had unprecedented access and the wonderful fortune to be following Lin during his senior year in college. Hit Fix has more commentary:

It’s a relief to report that while Leong’s “Linsanity” is a relatively familiar hagiography, the director had begun his focus on Lin before the madness and he was working with Lin’s candid cooperation. That means that while none of the facts or linear details in “Linsanity” count as a revelation, Lin’s personality is able to shine through. There are some very strange choices and problematic missteps in the storytelling here, but it turns out that I like Jeremy Lin and in a brisk documentary that goes a long way.

Unfortunately, no trailers are online yet, so you’ll have to settle for the following work by DaysideTV. It definitely did not premiere at Sundance, but it’s pretty good in its own right.