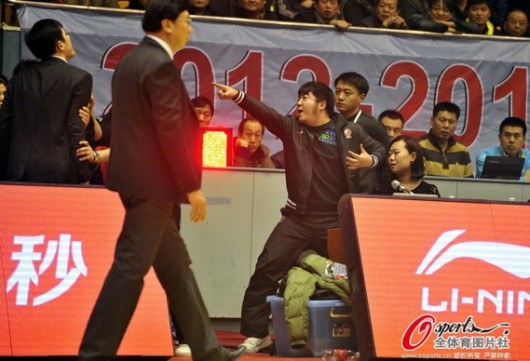 Also see, from earlier today, this. “The typical Chinese city is grey, ugly and congested. It has pointlessly wide roads and squares, and functional, boxy buildings clad in grimy concrete or dirty white tiles. The old parts of town have been demolished, save perhaps for a solitary pagoda, rebuilt and sucked dry of its historical sap. Its roads are jammed, the air filthy, the streets often unwalkable. Pavements and public entrances are blocked by private vehicles, whose owners scream abuse at cyclists and pedestrians for getting in their way. It is, in short, anything but ‘liveable’.” (The China Story)

Yeah, pollution sucks, doesn’t it? “Speaking at the opening of the annual session of the city’s largely rubber stamp legislature, Beijing mayor Wang Anshun said the government would take 180,000 old vehicles off the road this year and control the ‘excessive’ growth of new car sales. // The heating systems of 44,000 old, single-story homes and coal-burning boilers in the city center will also be replaced with clean energy systems, Wang said in a speech carried live on state television.” (Reuters)

Feature on Jin Auyeung. “In 2004, at 22, he became the first Asian-American to release a solo rap album on a major label in the U.S. // …For seven consecutive weeks, he dominated the program’s “Freestyle Friday” rap battles, fending off his challengers’ ethnic insults with rapid-fire retorts like: // “Yeah, I’m Chinese / Now you understand it / I’m the reason that his little sister’s eyes are slanted / If you make one joke about rice or karate / NYPD be in Chinatown searching for your body.” (NPR)

21 and Over movie interlude (there’s a decent chance that the funniest parts of the movie are all in this trailer, but hey, at least watch the trailer):
[youtube http://www.youtube.com/watch?v=Bc9vHeGNTY0]

Police in Shenzhen find alleged killer of 16-year old girl in a hostel in Longhua. (The Nanfang)

French revolution book The Old Regime and the French Revolution by Alexis de Tocqueville is a bestseller in China. (Xinhua)

The Lakers will be in China next preseason for the China games. (ESPN)