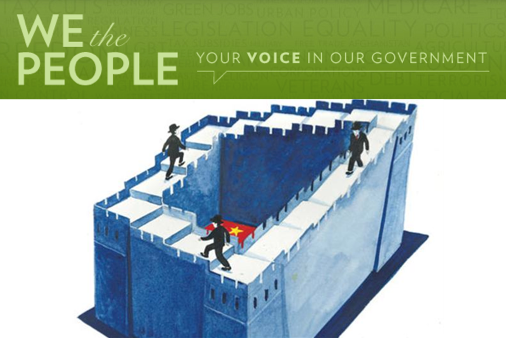 Nearly everyone hates the Great Firewall (GFW), which blocks websites such as Facebook, YouTube, Twitter and many others from being viewed inside mainland China. To “jump over” said firewall, a small cottage industry of VPN services have sprung up, such as Witopia, Astrill and 12vpn, to name a few, to help the frustrated Internet user get their “real” Internet fix. While most users of VPN technology are believed to be expats, many from China’s growing middle class are also using the technology.

Maybe because of this, in the last year, those involved with the GFW have made a concerted effort to block access to VPNs. While the cat-and-mouse game of online censorship has been ongoing for years, some Internet users have decided to take the issue to a whole new level to show their frustration.

On January 25, someone posted a petition to the official White House website asking the US to deny those involved in the GFW from entering the country:

People who help internet censorship, builders of Great Firewall in China for example, should be denied entry to the U.S.

Some will say that this will have no effect on the GFW’s ability to block websites in the future, but for anyone who has lived in China and ripped out hairs, thrown smartphones and laptops across the room and shouted “FUCK YOU GFW!” then this is just one way to get at those smug scholars who dedicate their careers to the restriction of the free flow of speech and information.