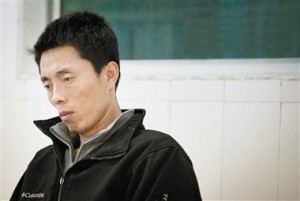 A father recently beat his six-year-old son to death while trying to teach him a few simple lessons in right from wrong. The man, Zheng Junpeng, was upset at his kid for stealing a classmate’s money, so he lashed him with a belt multiple times before sending him to bed. At 2 am the boy’s body was cold, and Zheng couldn’t revive him.

More information via The Nanfang:

The father, Zheng Junpeng, told police he was beating the boy to “educate” him at their home on Bantian Road. When he realised the seriousness of his son’s injuries, he rushed him to hospital, but the boy, Xiaohao, could not be saved.

It was the seventh child abuse case to make the news in Shenzhen in 2012, according to Southern Metropolis Daily.

The incident happened on December 28. It was not the first time the neighbors had heard — and seen — the father beat his child, according to Liaoning Satellite Television. Zheng said he himself was beaten by his father, and so the tradition was passed on.

The vicious cycle has been broken, in the saddest way possible.