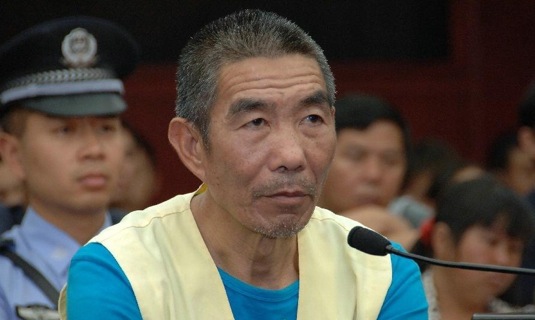 Whatever your feelings about capital punishment, I don’t think you’ll find many people weeping for Zhang Yongming, the serial killer who was executed yesterday in Yunnan province.

Zhang, described by the Telegraph as a “quiet, chess-playing farmer” who — and this imagery is kind of perfect — “lived in a wooden shack on the edge of the village” — made international headlines in May when he was convicted of killing children and young adults and selling their body parts at the meat market.

One of the eye-opening parts about this story was that Zhang had been convicted of murder once before — in 1978, when he dismembered his victim — but was released in 1997. And as a window into how the mentally ill are treated in remote villages — i.e. ignored — here’s the Telegraph describing a scene in which Zhang was caught trying to strangle a boy:

Then, last December, he was found trying to strangle a 17-year-old, Zhang Jianyuan, with a belt outside his house. At the time, the villagers called the police, but Zhang laughed off the episode, saying that he was just fooling with the boy.

“We reported to the police that Zhang had tried to strangle this boy, but they simply told us he was mentally ill,” said Xie Shunsheng, 39, whose 16 year-old boy Haijun went missing in January 2011.

Ha ha, what a funny man. Roughhousing with a boy he didn’t know, trying to kill him with a belt…

This episode happened in the midst of his four-year killing spree. From March 2008 to April 2012, according to the Kunming City Intermediate People’s Court, Zhang killed 11 people in Kunming’s Jinning city, often by strangling them.

Here’s one final detail for you, via The Standard:

“He has not been selling meat in recent years but I did see him once selling in the village what he claimed to be ostrich meat,” said Xie, whose 16-year- old son, Haijun, disappeared on January 1 last year.

We had no idea ostriches lived in Yunnan.