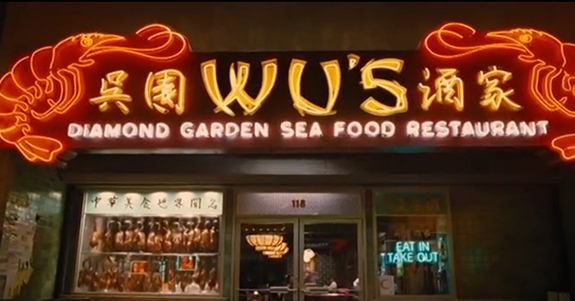 Does the above look familiar? It should. The exterior and interior, in one way or another, has appeared in such movies as Men in Black III, Seinfeld, The Fisher King, Mickey Blue Eyes…

And it most likely only exists on a Hollywood sound stage.

As the movie location scout who runs the blog Scouting New York notes, the classic stereotypes we hold about what a Chinese restaurant in America should look like often can’t be found in the real America. Contemporary Chinese restaurants just aren’t all that crazy about hanging lanterns, Ming-era latticework, and roasted ducks behind window displays.

But try and convince a director of this, and they will look at you like you just moved to the city last week. “Are you SERIOUSLY telling me,” they will ask incredulously, “that there isn’t a single Chinese restaurant in all of Manhattan with red wallpaper and crazy ornamentation???”

Yes. That is what I’m telling you.

Although you know what that means? A savvy restauranteur will now build a Wu’s Diamond Garden Sea Food Restaurant in New York. It will get killer business.

Scouting New York has a collection of pictures of Chinese restaurants in pop culture vs. real New York. See if you can spot the differences.