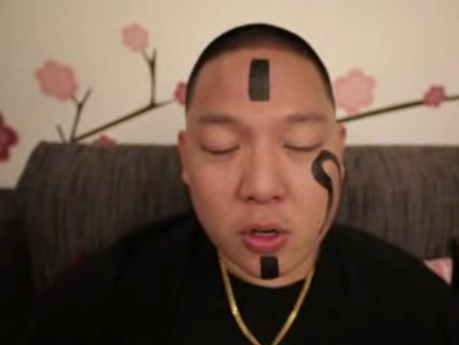 …we should be judged by the content of our character and not the color of our skin, but no one said anything about what’s in our pants.

There is an unspeakable fallacy that all Asian-American men must decide early in their adulthood to acknowledge or not, one that concerns their manhood. Call it the elephant in the men’s room. An Asian elephant that America believes has a small penis.

Ishii summarizes Huang’s childhood as a Floridian delinquent and a drop-out who — the implication is clear — is so insecure about his dick size that he compensates by doing things like “shooting at the Indian kids’ car with a paintball gun.” Huang, who hosts the Vice TV show Fresh Off the Boat with Eddie Huang, eventually goes on the “offensive” (Ishii’s word) and transforms into a “big dick Asian” (Huang’s words), as if we should all aspire, as men, to become testosterone-powered meatheads who power-walk and feed on introversion while victimizing modesty, niceness, and pussy.

Ishii writes the following with no awareness that it encompasses everything that is wrong with the “popular culture” she accuses Huang of seeking:

It is worth noting that Huang’s offensive comes as Asian-American men start to infiltrate a category of manhood that hasn’t been available to them since Bruce Lee. This manhood has accrued the descriptors jock, or meathead. A pejorative when applied to other races, when it concerns the ever-elusive Asian masculinity, the image is almost endearing.

Surely that’s an indictment of American culture, which allows such terms as “jock” and “meathead” ever be terms of endearment, and also these “Asian-American men” who pursue such appellations in order to “endear” themselves to said culture, yes?

Ishii does not address this. Instead, we get this excerpt, an exchange between Huang and his cousin:

“Yo, you notice Asian people never get any pussy in movies? Jet Li rescued Aliyah, no pussy! Chow Yun-Fat saves Mira Sorvino, no pussy. Chris Tucker gets mu-shu, but Jackie Chan? No pussy!”

“Damn, son, you right! Even Long Duk Dong has to ride that stationary bicycle instead of fucking!”

And a little later:

By exchanging tropes of the emasculated Asian male and the “dick-swinging” black man, he demonstrates that all stereotypes are volatile and irrelevant.

One could argue though, that he fetishizes the black size myth to neutralize the Asian one. Amid references to hip-hop and gangster rap, the author fantasizes about an America that fears the mentally unstable Asian-American man, just as it fears black male anger.

Ishii believes that the ultimate compliment, at least as it concerns one’s manhood, is to be feared. Success is confidence, not achievement. It means embracing the Napoleon complex at the risk of being a poseur, because style is more important than substance. Because a man’s ability to swindle with charisma is more meaningful in modern American society — never mind how offensive this belief is to America – than his willingness to engage in thoughtful, interesting, or meaningful exchanges.

Let’s skip ahead to Ishii’s final paragraph, published after an editor at Slate, I imagine, said, “Fuck it, I’m not editing this shit”:

This is about, in other words, a Big Dick Asian suiting up against the status quo and rallying his “chinkstronauts” to venture with him into the great unknown—because this is America.

Because in America, it’s not the nice guy who finishes last. It’s the guy who has to believe size doesn’t matter.

The type of people who would nod to either Ishii’s review or Huang’s book are those who watch Jackass believing it earnestly glorifies that aspect of American idiocy. It appeals to the worst of our characters, but it’s offensive not because it dares to be controversial; it’s simply and mind-numbingly stupid.

“Holy shit! Peep the shitter. Bang! Shower next to the toilet. You could technically take a shit and shower at the same damn time. Future!”

5 Responses to “Anne Ishii Writes About Eddie Huang And The Size Of Asian Men’s Penises. Read At Your Own Peril”