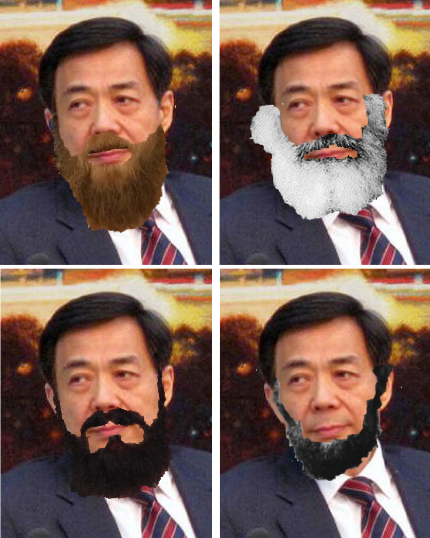 Not only has the Bo Xilai trial still not happened, but the public hasn’t seen him in 11 months. When we do finally glimpse him (though at this point, it might be if, not when), indications are he’ll look remarkably different from before.

That’s because Bo Xilai has a “chest-length beard.” Reports Reuters:

A second source confirmed that Bo had been on a hunger strike and also said he had refused to shave to protest against what he saw as his unfair treatment.

“His beard is long, chest-length,” the source said.

Oh, right, he’s also on a hunger strike and being uncooperative.

“He refused to cooperate,” the source said. “He wouldn’t answer questions and slammed his fist on a table and told them they were not qualified to question him and to go away.”

But the beard, the beard. We must know: what does Bo Xilai looks like?

Better yet, can you guess whose facial hair Bo is wearing in each of the above images? Hint: all but the beard in the top-right panel belong to Americans.

We’ll update this post with answers on Monday. Happy guessing.

One Response to “Bo Xilai Apparently Has A Chest-Length Beard, Maybe Like This?”