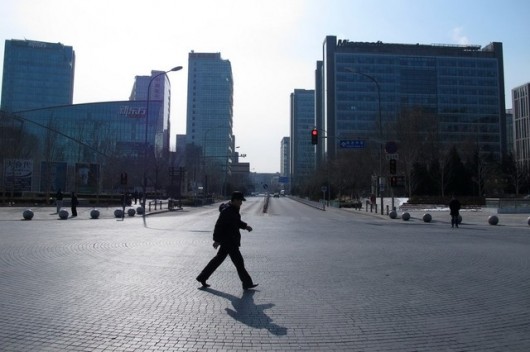 Beijing cleared out, via Shanghaiist

They’re setting off fireworks in Hong Kong’s Victoria Harbor right now. We’ll have video later, but let us know if you enjoyed it, if you’re there. First links edition of the Year of the Water Snake commences now.

Activist jailed for message? “According to news found on Tencent Weibo and brought to Twitter, on February 6, activist Cheng Wanyun (程婉芸) in Nanchong, Sichuan (四川南充), was detained shortly after she made a comment under a post by Xi Jinping fan club (http://t.qq.com/txuexifensituan/). Well-known activist Liu Shasha (刘沙沙), who spoke to Cheng shortly after the latter arrived at the police station that evening, confirmed the cause of Cheng’s detention.” (Seeing Red in China)

About “Spring Festival.” “Speaking of neutered, has there ever been a blander term than ‘Spring Festival’? What the hell does it even mean? It’s held in the middle of winter. In North China that means we celebrate spring by huddling around in weather that is so goddamn frigid the sheep start voluntarily walking up to chuanr guys and saying, ‘Seriously fucker, let’s just do this.’ // For thousands of years it was simply the New Year, at least according to the moon.  So what changed?” (Jeremiah Jenne, Rectified.name)

Snake game. “Goodbye, productivity. Google’s Hong Kong and Taiwan home pages have added an interactive snake-doodle game in honor of Chinese new year. Your correspondent’s high score is 80, as touted in the image above. // Baidu has also embraced the New Year spirit, coincidentally in exactly the same manner as google. Clicking on the Baidu graphic also launches a version of the snake game, albeit one that is choppier and a bit rougher than Google’s.” (Shanghaiist)

Hmm. “China has unveiled sweeping tax reforms to make wealthy state-owned firms, property speculators and the rich pay more to narrow the gap between the urban elite and hundreds of millions of rural poor. // The plans approved by the state council – China’s cabinet – also included commitments to push forward market-oriented interest rate reforms to give savers a better return and more security.” (Reuters)

An interview with this guy. “Huang Qi is best known in China as the creator of the country’s first human rights website, Liusi Tianwang, or ‘June 4 Heavenly Web.’ A collection of reports and photos, as well as the occasional first-person account of abuse, the site is updated several times a day. It documents some of the hundreds of protests continually taking place in China, many related to government land seizures.” (Ian Johnson, NYR Blog)

A decent movie, this. “American audiences have an opportunity to answer that question as China’s biggest box-office hit ever for a domestically made movie opened in major cities on Friday. // ‘Lost in Thailand,’ a low-budget comedy that hit theaters Dec. 12 in China and is still in release there, steamrolled its competition during the important end-of-year period when many Chinese blockbusters are released.” (WSJ)

Xi Jinping urges CPC to be cool in face of criticism. “‘The CPC should be able to put up with sharp criticism, correct mistakes if it has committed them and avoid them if it has not,’ he said. // ‘Non-CPC personages should meanwhile have the courage to tell the truth, speak words jarring on the ear, and truthfully reflect public aspirations,’ he added.” (Xinhua)

Elton John / Ai Weiwei closure, hopefully finally. “A culture ministry spokesman said there were no new regulations. They did not address specific questions that the Guardian had asked regarding the meeting, replying: ‘About what you said in the fax, there is no such thing.’ // Another source said that since the start of the year, classical musicians had been required to supply proof of degrees and other qualifications when applying for permission to tour China. ‘There is no doubt at all it has made things harder,’ said one of those with knowledge of the meeting, adding that several recent applications for licences had been rejected.” (The Guardian)

Kid’s 10. “My dream is to live with a girl I love. It doesn’t matter if I have to cut firewood or pick up scraps for a living,” 10-year-old Feng Shaoyi, a middle school student in Zhuhai, Guangdong Province, expressed in an online manifesto titled ‘Dropout application.’ // ‘School life is all about classes, homework, exams and rankings. Is there anything more than this?’ he asked. // His ‘Dropout application,’ posted online in November last year, has attracted more than 7,000 comments and over 18,000 followers to his Sina Weibo.” (Global Times)

HP urges better practices. “Hewlett-Packard, one of the world’s largest makers of computers and other electronics, is imposing new limits on the employment of students and temporary agency workers at factories across China. The move, following recent efforts by Apple to increase scrutiny of student workers, reflects a significant shift in how electronics companies view problematic labor practices in China.” (NY Times)

“Bridging the Gap (II)”: a poem. (Stephen Nashef, the Anthill) 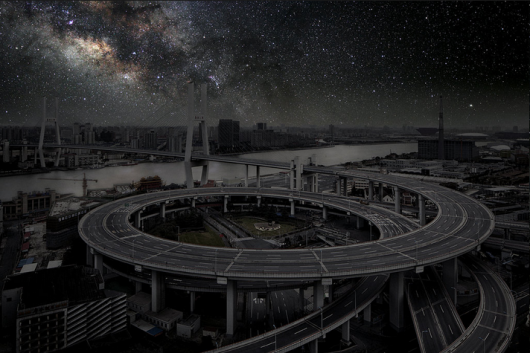 Shanghai if you could see the stars, via NY Times Magazine (photo illustrations by Thierry Cohen)