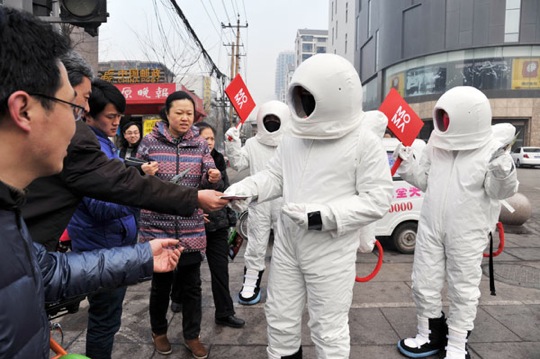 “A man dressed as an astronaut hands out free masks on a street in Taiyuan city of North China’s Shanxi province,” via China Daily.

Blogging in absentia for the next two weeks, so please excuse any delays. Links time.

When virtual goes real. “World of Warcraft players have gone viral in some pretty weird ways in the past, but a Chinese gamer may have created a new piece of Chinese internet history recently when he told guild members that he had had one night stands with several of the guild’s female members “for the Alliance.” His chat with another WoW player about his exploits has since been posted to a number of gaming sites (including QQ Games) and has attracted hundreds of comments. After an extended discussion, the other player asks ‘So you switched servers and came into our guild just to do our girls?’ and the first gamer responds simply: ‘For the Alliance.’” (Tech in Asia)

Gaokao reform is necessary. “China’s Gaokao college entrance exam, which heavily tests rote memorization and decides the fate of China’s youth, is objectively awful. Students know this, teachers know this, the government knows this, my aunt Agatha knows this. Recently though I’ve gained a new appreciation for just how horrific it is.” (Eric Fish, Sinostand)

Chinese aren’t as eager to gobble up crappy Hollywood movies? I hope so. “Over the years one of the most reliable truths of China’s film business has been that Hollywood action films sell. Bond films Casino Royale and Quantum of Solace, theTransformers movies, Avatar, Men in Black and other Hollywood action tent-poles have been the rock upon which China’s booming multiplex business was built. Even North American duds like Battleship, John Carter and The Mechanic could count on China to shore up their grosses and give them a measure of international respectability. // But during the past year Chinese audience tastes have broadened, and U.S. action films have experienced a lull in popularity that just might be the beginning of a decline.” (Robert Cain, China Film Biz)

Washington Post hacked in China, WaPo says. “A sophisticated cyberattack targeted The Washington Post in an operation that resembled intrusions against other major American news organizations and that company officials suspect was the work of Chinese hackers, people familiar with the incident said. // Post company officials confirmed the broad outlines of the infiltration, which was discovered in 2011 and first reported by an independent cybersecurity blog on Friday. But they did not elaborate on the circumstances, the duration of the intrusion or its apparent origin.” (Washington Post)

21 eh? “Spending a day here when smog blankets the city and the air pollution is severe is equivalent to smoking 21 cigarettes, or about a pack a day, according to a survey by a company related to the environmental industry.” (The Asahi Shimbun)

Nearly 100 immolations, and… “Yet as that milestone hung over the estimated 5,000 Tibetans who gathered in a small stadium, so did an uncertainty about whether the rest of the world was paying attention at all. In speeches, Tibetan leaders described the self-immolations as the desperate acts of a people left with no other way to draw global attention to Chinese policies in Tibet. // ‘What is forcing these self-immolations?’ Lobsang Sangay, prime minister of the Tibetan government in exile, asked in an interview. ‘There is no freedom of speech. There is no form of political protest allowed in Tibet.’” (NY Times)

Um. “The climate of tensions is thick enough to have drawn comparisons to a perilous moment a century ago. In separate opinion pieces this week, two former Asian foreign ministers likened Asia now to pre–World War I Europe, then strung together by a tangle of imperial enmities and alliances. The South China Sea — a pivotal, strategic body of water that China considers its “internal lake,” much to the ire of its neighbors — is, like the Balkans a hundred years ago, the supposed tinderbox that could spark a larger regional conflagration, if not a full-fledged war.” (Ishaan Tharoor, Time)

Bureaucracy lit. “The Chinese author Wang Xiaofang learned to write corruption exposés the hard way. His decade as a pen-pushing civil servant culminated in a three-year investigation for corruption while his boss, the deputy mayor of the rust-belt city of Shenyang, was executed for gambling away $3.6 million of public money in Macau’s casinos. // Wang was eventually exonerated, but this history adds a frisson of reality to the 13 novels he’s written, each of which details Machiavellian office politicking along the corridors of local government.” (Louisa Lim, NY Times)

One of those bad-traffic weeks:

“The Onion Freely And Happily Gives Its Employees’ Passwords To China.” (The Onion)

“Long ride” around China. (The Globe and Mail)

Cannibalism in North Korea. (The Voice of Russia)

A glimpse of Chongqing. (Chengdu Living)

As part of a larger infographic via Tea Leaf Nation: 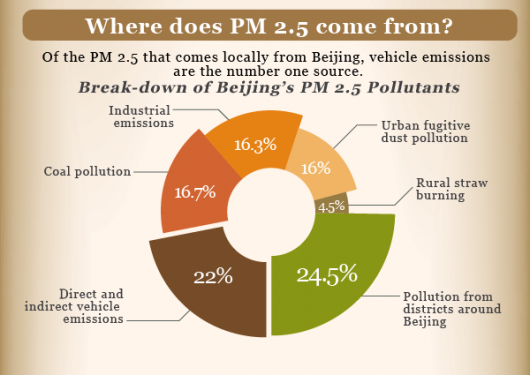 3 Responses to “Top-of-the-Week Links: Washington Post reports being hacked, infographic on Beijing’s pollution sources, and “For the Alliance””