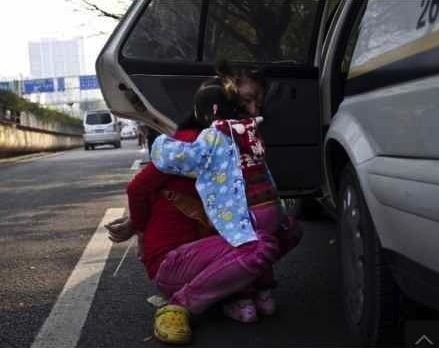 Netizens are outraged by a recent incident in Guangzhou involving urban street management enforcers, i.e. chengguan, whose reputation continues its uninterrupted plummet in this country. A young mother was physically harassed by officers in front of her two-year-old daughter, leading commentators to urge representatives at the Two Sessions in Beijing to pay attention to this flagrant violation of dignity.

Yu Jianrong, a scholar at the Chinese Academy of Social Sciences, posted about this incident on Sina Weibo, and it’s since blown up. BJC reader Will Crook passed along this illustration, which about sums up popular perception: 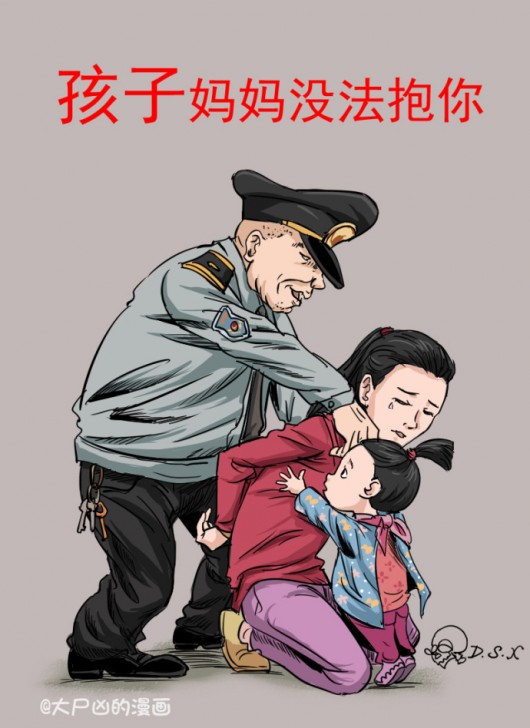 The red lettering reads: “Child, mama is unable to hug you.”

郑渊洁, popular kid story writer, asked: “Since when did we become a country that ignores the existence of kids? Shouldn’t we pay attention to the psychological impact on minors during law enforcement efforts?”

郑渊洁 isn’t the only one who questions the environment that this fast growing country has created for its children. Netizen 老衲不老518 asked: “My only thought is that whether this kid, when grow up, will think about killing a few Chengguan.” Netizen 华之强 commented: “This will be a life-time scare for the kid.”

Some of China’s mainstream media also jumped in the chorus of criticism. The Beijing Newscommented: “Please remember this frightened kid on Guanzhou street. The kid doesn’t know what law is, but she knows that her mom has been bullied. Law enforcement shouldn’t cross the bottomline of humanity, shouldn’t crush the dignity of a mom. A country that fails to mange its Chengguan team owes a lot to this kid.”

Chengguan don’t have the easiest job, but looking at images like the below, it sure is hard to feel sorry for them.