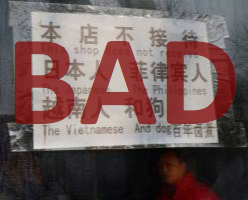 “I don’t have any regrets,” he told AFP. “I was just getting too many phone calls about it.”

Well, that makes sense. This, however, does not:

“Maybe people misunderstood our meaning… it only said we would not serve customers from those countries,” he said.

Meanwhile, we’ve learned that the restaurant serves “soup made with pork offal and gravy-soaked biscuits.” So there. Another reason not to visit. (But we’ll let you know if we do.) UPDATE, 3/6, 10:05 am: Like this.