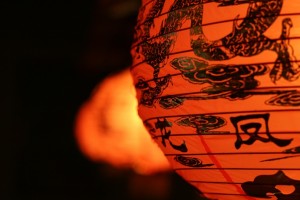 Last Sunday night was Lantern Festival. As such, C and I had holiday dinner next door with a friend of hers whose parents, sister, and the sister’s spunky 6-year-old daughter were in Shenzhen for the holiday. The dinner was fine, lots of salty spicy fish, chicken and pork dishes, and some vinegary cucumbers.

I toasted with a vodka and tonic while the others raised modest glasses of cheap Chinese red wine mixed with 7-Up. For reasons I’ve never been able to pinpoint, red wine with Sprite or 7-Up (or scotch mixed with green tea) is considered the height of sophisticated drinking by many middle-class Chinese, though I’ve long since disabused C of that notion and she now admits it tastes lousy. She only bent her Absolut on the rocks rule in order to “not be the bird that flies away from the flock.” As a foreigner, the flock rule doesn’t apply to me.

We returned to our place and before we slept she told me she was leaving the balcony light on for the night.

“It’s so our ancestors can find their way to where we live tonight.” She cleared her throat and laughed self-consciously. “But I don’t know how mine are going to know where I am in Shenzhen…” (Her hometown, Dandong, is more than 1,000 kilometers north).

“I don’t know how mine are going to find me either,” I said. “Most of them probably never thought of coming to China — except maybe my mother’s father, Knox. He was Irish. Before she died my mother told me he loved reading stories about Asia, particularly by a British writer named Kipling. Something about a ‘Burmese girl,’ I think, too.

“Though I don’t know that story or poem. Maybe if he had a thing for a fantasy Asian girl from Burma or China, he’d have enjoyed knowing about us.”

We slept as the balcony light glowed through a night punctuated by staccato New Year’s fireworks and omnipresent smoke. And I dreamed.

I dreamed that my grandfather Knox who died when I was two and my mother Mila who died 12 years ago were told I could be found in China. If they desired, they could leave whatever realm the dead inhabit and join others who were visiting their descendants here for one night.

I’ve no real memory of my grandfather, though I’m told he was fond of me and that he died peacefully napping on his couch after lunch as my mother, dad and I were visiting him and my grandmother.

“You played on his body until the ambulance came,” my mother told me. “You didn’t know he was dead and thought he was pretending to sleep. It was a game you’d played with him before.”

Now I am sleeping and my dead grandfather and mother are flying through the air to see me in China. He calls it “Cathay” in my dream because that’s what Shenzhen’s province, Guangdong, was called by foreign barbarians when he was alive. Cathay.

“C’mon now, Mila. We’re flying to Cathay to see Justin,” he tells my mother. He’s wearing a tweed suit, white shirt, thin tartan tie and perhaps set off with a tweed newsboy cap, attire I either imagine or think I’ve seen in old photos of him.

He hasn’t lost his Irish accent in my dream. He came to the US as a young man who’d taught at a deaf school in Belfast and had dabbled in boxing only to visit a brother in Oregon who had immigrated to the US. But Knox never returned to Ireland until many years later.

While in America he’d caught polio shortly after coming and the Illinois woman he eventually married was one of his nurses. She was my grandmother but she’s not visiting tonight. It was also complicated between her and my mother and probably still is in the hereafter.

“Hullo mum,” my grandfather had greeted his mother with an American accent upon returning for a visit to his ancestral home in Northern Ireland’s County Down. According to family lore, he was limping due to the polio. His mother stood silently on the porch of their whitewashed home called The Spa.

“Ah, Knox. You’ve got the Yankee twang,” she finally said of his greeting. Until this exchange, they not spoken to or seen each other in the 25-plus years since he’d left for a “short” tour of America.

There is no Yankee twang in my dream. He’s soaring through the air to Cathay — a place he’s only perhaps read and maybe dreamed of — arms outstretched like Peter Pan, one hand clasping my mother’s who looks as she did in her high school and college photos.

In those black and white pictures she isn’t tethered to an oxygen tank or embittered and numbed by the booze and pain pills that momentarily pacified her arthritis pain but inflamed her demons.

She’s not even Mila. Tonight she’s “Johnnie,” a high school/college nickname due to her maiden name, Johnston. She sometimes smokes a pipe and is already a talented artist. She wears bobby socks and is a babe. And though it was also very complicated between her and her father, tonight they’re feckless and free together. She’s thrilled to be on her father’s arm flying and free-falling to Cathay to see her son, and her father is quietly proud to take her. And though it’s a country of 1.3 billion, with a gazillion more dead Chinese ancestors crowding the airspace tonight, they’ll have no problems.

You see, because beautiful C has left the light on so they’ll know where to find me.