How scary is the Democratic People’s Republic of Korea? Let’s first look at the argument for “very scary.” Via Foreign Policy:

North Korea today can threaten all of South Korea and parts of Japan with its conventional missiles and its conventional military. The North can fire 500,000 rounds of artillery on Seoul in the first hour of a conflict. Stability has held for 60 years because the U.S. security alliances with South Korea and Japan make it clear to the North Korean leadership that if they attacked South Korea or Japan, they would lose both the war and their country. And, for half a century, neither side believed that the benefits of starting a major war outweighed the costs. The worry is that the new North Korean leader might not hold to the same logic, given his youth and inexperience.

Right, et cetera. But let’s look at the counterpoint, shall we? 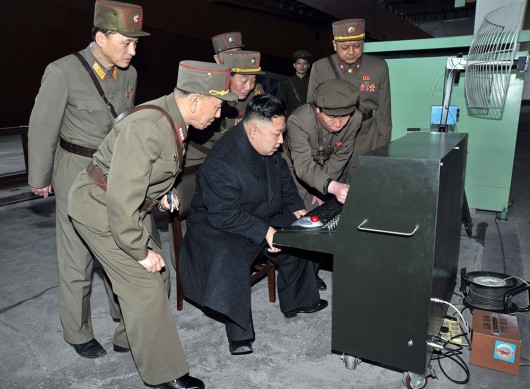 That Reuters picture, via KCNA, was posted by Max Fisher of the Washington Post. Fisher writes:

Now, it’s possible that this computer – encased in a giant metal box, looking very retro – does something amazing. But note some of the environmental details: the dining room chair, the consumer desktop keyboard and Logitech mouse. None of those really scream “advanced military computing technology” so much as they suggest “we should put an old Dell in this metal box to show to Dear Leader.”

Yeah, um. North Korea’s still playing Brood War while everyone else is on Heart of the Swarm. They’re not going to war anytime soon.

2 Responses to “Exactly How Scary Is North Korea? Point-Counterpoint”