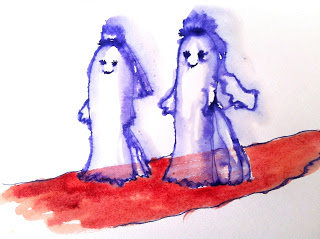 After washing the corpses at home, they managed to sell them for a total of 240,000 yuan. The thieves even forged medical files (and presumably fake identities) so that it would be easier to do so.

Why would anyone do such a thing?

The answer has to do with something called minghun [冥婚], or ghost marriages. Carrying on the family line is extremely important according to Chinese tradition, and obviously, those who have the bad idea of dying single and unmarried cannot do that.

In that case, in certain rural parts of northern China, grieving relatives might find a suitable (i.e. dead and single) spouse for them, often through a matchmaker.

The practice of ghost marriages goes back thousands of years, but is extremely uncommon nowadays except in certain rural areas of Shaanxi, Shanxi and Hebei.

Obviously, body-snatching is not an accepted part of this, but since there are dowries involved, there is money to be made for unscrupulous dealers who don’t mind getting their hands dirty.

Modern ghost marriages typically involve effigies made from papier mâché rather than actual corpses, so they are more similar to the burning of “hell money” to dead relatives.

This kind of belief might sound ridiculous. Then again, so is believing that those who love people of the same sex (or belong to a different church) will burn forever in an underground furnace.