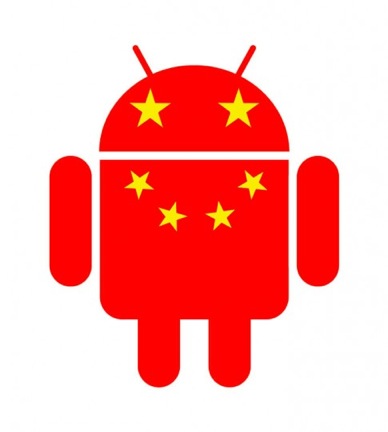 Cell phones are a vital possession, no doubt, but how to choose one in China, where the selection seems endless? Real, fake, cheap, smart, new, stolen, mixture of several previous phones, one SIM card or three, etc. With such a large market, companies in and out of China are vying for a piece of the cellular pie, but the largest share by far belongs to the foreign-owned Android (Google) — a fact that the government may rue. A Ministry of Industry and Information Technology report published March 1 called China Academy of Telecommunication Research (brought to us by China Digital Times) highlights concerns over the pervasiveness of Android, which is run on 80 percent of Chinese cell phones.

“Our country’s mobile operating system research and development is too dependent on Android… While the Android system is open source, the core technology and technology roadmap is strictly controlled by Google.”

Furthermore, feathers were ruffled earlier when Google dropped a deal with Chinese Alibaba’s Aliyun system, explaining that Aliyun too closely resembled Android to reasonably be considered a new product. We caught you, you cheaters (tongues sticking out)! The Chinese government acted especially miffed in light of Google’s agreement, upon its absorption of Motorola, that it would not discriminate against Chinese companies in favor of Android.

So, who has the right of it? Will China redesign regulations to specifically block Android? Is Android getting nauseatingly full from all of that pie? One concerned conspiracy theorist shares his views:

Announcement from One Concerned Conspiracy Theorist
Citizens Beware: Androids Are Coming Are Here Are Overtaking Cell Phones at an Unstoppable Rate
AAAAAAAAAAAHHHHHHHHH

They’re in your homes and workplaces and purses and man-purses!

Thankfully, the Chinese government has already begun to address this concern — Aliyun, an Alibaba product, is waiting in the wings ready for action. And perhaps Google really is to blame for breaking its prior agreement not to discriminate against non-Android products.

Duncan Clark, chairman of technology consultancy BDA, gave this opinion to Reuters not too long ago, and a truer alliterative statement never twisted our tongues so well: “In China, regulators regulate regularly especially where they can position the regulations as helping out domestic companies.” The government may soon act to safeguard its citizens and domestic companies from the evil influence of the droids from beyond.

Black and white. The invasion is well on its way; we must take action now to combat this growing threat! Beware: the Android is in a store near you.