A Lamborghini is worth more than a mega gazillion bucks. A Rolls-Royce is worth a bajillion trillion dinero. Crash one into another, and you have at least one insurance company with one ginormous headache.

In Chongqing’s Nanbin Road a few days ago, a Lamborghini was spotted with its nose buried in the back bumper of a Rolls Royce. The fender-bender doesn’t look bad, but listen nonetheless to the disbelief in the two passengers who filmed the accident. They know an expensive paint replacement job when they see one.

“As the camera slowly approached, Mr. Hu was unable to hold back his heart’s excitement,” according to Chongqing Morning Post. “While filming, he talked it over with his friend, with netizens deeming his phrase ‘beautiful woman, a beautiful woman,’ one of the funniest parts of his commentary.”

The total value of the two cars apparently exceeds 8 million yuan. Netizens, as one would expect, are having a good laugh over this:

@棕榈墅: “Only the two parties can settle this amongst themselves, no way the police or insurance company would dare to show themselves upon such an expensive accident.”

The fender bender has also apparently inspired the worst photoshop job in history: 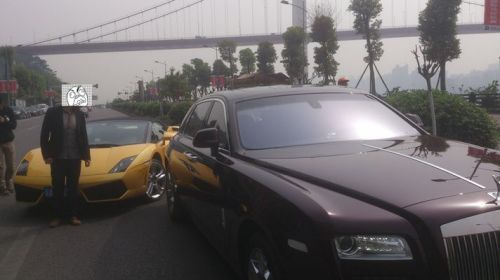 But we wouldn’t worry too much for these drivers. Something tells me they’re not short on banknotes with which to wipe their tears. That something is the fact that they drive a Lamborghini and Rolls Royce. 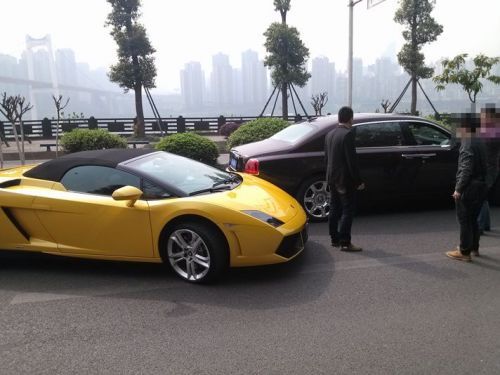 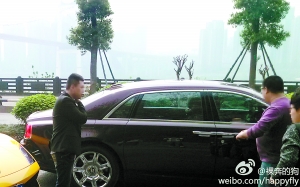