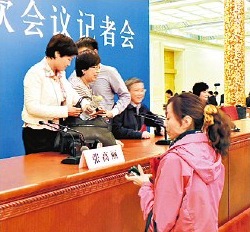 We’ve read enough stories about Li Keqiang’s inaugural press conference as premier, and there’s not much more that can be said. But apparently what happened after he spoke may be more interesting.

After Li and the other vice premiers left the venue, many reporters rushed to the stage to snatch up pencils and papers used by top officials. At the same time, several female reporters aimed for things bigger than stationary – they wanted the bottle of mineral water that Li drank from. Li was reportedly pouring water into a glass so that his lips never touched his bottle. At the end, a lady in a white jacket got to the bottle first, and began drinking!

Other reporters, meanwhile, wanted invitation cards. Only those with invitations could attend the press conference — they were shown at the door and then collected. But afterwards, flocks of reporters surrounded staffers, asking for cards to take home as mementos. The lucky ones ended up leaving with stacks.

I’d like to suggest that from now on, government auction off all used materials from major press conferences. People love buying souvenirs wherever they go. This isn’t a bad idea at all to raise some money for the government, maybe?