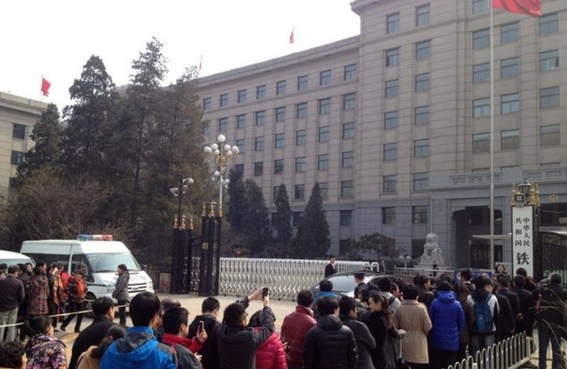 The question that was immediately on everyone’s mind in Beijing: when would MOR’s signature plate, which has been up for 64 years, be removed from its office at the Avenue of Eternal Peace?

People waited outside, in front of the famous plate, every day starting March 10 — waiting, just waiting in vain. And then finally, yesterday morning, it happened. It was a low-key event, without ceremony or fireworks. A handful of employees simply came out at dawn and took down the sign by hand. Only a few pedestrians were lucky enough to have witnessed the historic moment.

When reporters from Xinhua arrived at the scene at 11 am, the three characters for MOR — 铁道部 — were nowhere to be seen. The new plate reads, “China Railway Corporation.” According to Xinhua, the old plate has been sent to China Railway Museum.

On the same day, the Ministry of Health in Haidian District, which has been around for 32 years, was quietly re-plated to read “National Population Control and One-Child-Policy Burea.”

A man who didn’t want to be identified told reporters that as a former railroad worker, upon hearing the March 10 announcement, he took leave from work in Hebei province to take one last look at the ministry whose history is so closely entwined with that of New China.

Netizens on Weibo have expressed regret. User @wooden_head wrote, “I drove by for work and was appalled to see the new plate! My family and I came over twice before and it didn’t happen. Man, why did they take it down so unexpectedly!”

Most Chinese, however, are optimistic about the changes being implemented. @不能吃我, a self-proclaimed railroad fan, wrote that she took a picture of the old plate and the new one. “Change is good. Change means hope, and I have faith that the future of China will be different and better.”

The Ministry of Railways Timeline:

October 1, 1949: The Ministry of Railways of China is established, according to the 18th commandment of Law of the State Council of the People’s Republic of China.

September 1954: The Ministry of Railways is fully controlled by the Central People’s Government, the chief administrative authority of China.

1970: The Ministry of Transportations falls under the Ministry of Railways, so that MOR becomes a single powerful agency that controls everything running on the road.

March 2013: the 12th National People’s Congress terminats the Ministry of Railways and replaces it with China Railway Corporation.