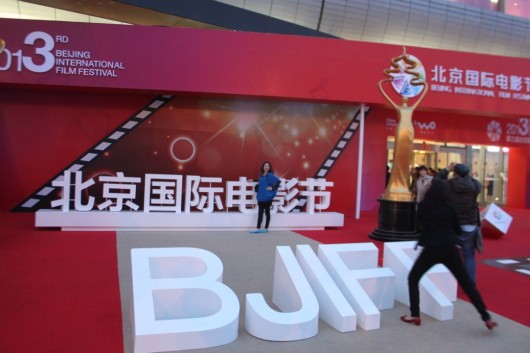 The closing ceremony for the third annual Beijing International Film Festival was held last Tuesday at the China National Convention Center, a multiplex which is the size and roughly the shape of an intergalactic ship docked on a bay of concrete just north of the National Aquatics Center on the Olympic Green. The event aims to be “international, professional, innovative, high-end and market-oriented,” according to its website, with emphasis on international. The word pops up everywhere, the show is bilingual, the films hail from 56 different countries, and the seven-member judges’ panel is nothing if not multinational, led by Russian director Nikita Mikhalkov.

The extravagance, unfortunately, served to prove yet again that glitz is often merely farce dressed up. What we witnessed was the red-carpet-film-awards equivalent of a Chinese factory owner hiring a white face to accompany him on an inspection tour. We were treated to a comedy of miscommunication that would have made residents of Babel grimace. Less a showcase of the cinema than a self-congratulatory trade show, the audience reacted accordingly, supplying often mistimed applause more tepid than you’d find from an American crowd at a cricket match.

In the spirit of not being rude to the organizers of the closing ceremony — and most of all, out of sympathy for producers, directors, actors, stagehands, entourages, cameramen, sound crew, and all those who were forced to attend — I will limit myself to only five examples of why this night was a mild debacle, a harmless travesty.

1. The very first award, for Best Music, was presented by Miriam Yeung, an actress and Cantopop star, and Cameron Pearson, one of the jurists. In English, she told him she was “so happy and feel so warm after I met you.” That’s terrible, Miriam. You’re from Hong Kong; can you at least pretend it used to be an English colony?

Pearson’s response only upped the awkwardness: “Well I’ve seen you in the film Love in the Puff, and, uh, you’re not only a great singer but also a great actress.”

“So, how about we just put it back a bit,” Yeung says, and one wonders: is Marvin Gaye about to burst through the sound system?

“We’re going to announce the award for…”

“…best music at the third Beiing international Film Festival.” With no pause for suspense: “The award goes to Vahagn Hayrapetya, the composer of If Only Everyone, from Armenia.”

2. The second award, for Best Cinematography, was presented by cinematographer Gu Changwei — he who is truly awesome, having worked on films such as Red Sorghum and Farewell My Concubine – and actress Charlie Yeung, she who appeared truly high off her mind. Yeung, however, used a universal language: giggling. It was so universal that foreigners and Chinese alike, in the audience, went wide-eyed to suppress looks of embrassment.

Suddenly, Yeung hesitates. “I feel like I should open this and let Teacher, you read this, how about it?” she suggests.

The envelop is already open. A terrible thought crosses my mind: she doesn’t know how to read the characters written on the envelop.

Nervous, nervous laughter out of Yeung, as I think, Oh God. I can see the train wreck approaching but am powerless to stop it.

“Best Cinematographer… the winner is… uh…”

“Adam Arkapaw,” Yeung says, and then stops speaking. She holds the card out for Gu Changwei, who quickly reads off it with no problem at all. Apparently, one attains 20/20 vision once mortified.

Adam Arkapaw, of Australia’s Lore, is represented on stage by a producer who is never named, but is probably Liz Watts (more on her later). She acknowledges Gu Changwei as a “master” but ignores Charlie Yeung, who cackles like a maniac for no reason.

3. The third award is presented by Kang Jekyu, Japanese director (accompanied by his translator), and Yu Nan, Chinese actress. Kang speaks some Japanese, which no one understands (because no Japanese film is among the 15 finalists, so the country isn’t exactly well-represented). After the translation, Kang Jekyu looks at Yu Nan, shyly, who returns his glance. She pushes forward the heel of her hand in a “Yes, please continue” gesture. He looks at her and returns the gesture, sort of. He then speaks Japanese, which I’ve already established no one understands, but, well, listen: I don’t know three words of Japanese, but I can guess exactly what he’s saying, and it’s, “You read the goddamn card you bitch because I’m Japanese and can’t comprehend this gibberish.” Yu Nan blinks at him because she’s dumb and says in Chinese, “I don’t understand, sorry.” Nobody does, Yu Nan. Nobody understands why any of this is allowed to happen.

4. This guy, part of the Great Expectations crew: 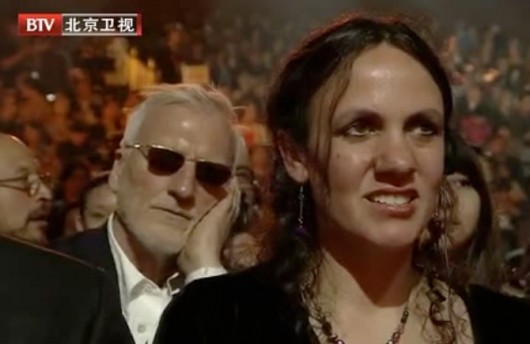 5. We’ll end on a funny note. Actor Vahagn Simonyan, who had a better time at this award show than just about anyone (think Three Six Mafia at the Oscars), won Best Supporting Actor for his role in If Only Everyone (there’s that Armenian movie again!). He took slightly longer than others to make his way to the stage because he was excited and made a quick detour to hug some people first, but as he’s walking up, the host — a short Chinese dude with impeccable English — has the effrontery to say out loud into his microphone, “This is the stage,” as if Vahagn fucking Simonyan didn’t know how to get there without fucking stage directions.

I laughed out loud, as did The Good Doctor, who was sitting next to me. But fuck that host, man.

Here’s Simonyan taking pictures with anyone who asked during the middle of the show: 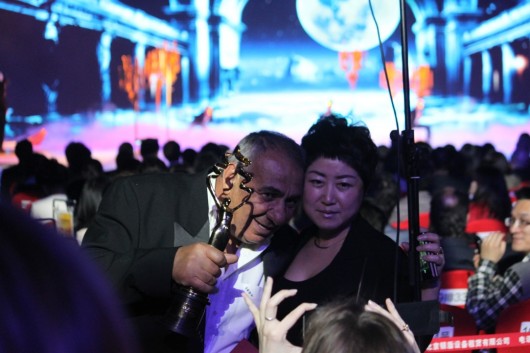 Real quick: another highlight was Paul Andrew Williams. Director of Song for Marion, he won twice, the first time for Best Screenplay.

Paul grabs the trophy as an afterthought. “Okay, I’m very, very, very grateful for this award. If I knew I would have won something, I would have got such a better shirt than this,” he deadpans. He’s British. In the video below you’ll hear absolutely no laughter, but The Good Doctor and I and a couple of others around us, rest assured, were chuckling out loud. “I’d like to thank the jury. They say you can never buy a jury but we obviously did.”

The host translates a lot of what he said but skips the part about buying the jury. You can’t cut that close to the truth at a Chinese awards show.

And now we come to this… Sarah Brightman:

If there ever were a friendlier friend of China, no one has seen him or her. With all the made-for-TV eagerness befitting an operatic pop star and reputed friend of China, Brightman, upon finishing Scarborough Fair (above), answered questions from that smug Chinese host, recalling her 2008 Olympics as the “highlight of my life.” But before that, in response to a leading question, she muttered a phrase of “Chinese.” If I could double-quote “Chinese” for effect, I would. You’ve probably already guessed the phrase was supposed to mean “I love Beijing,” but listen to how it came out:

Bless her heart and her vim, truly. But that was awful.

This was better — a performance of Phantom of the Opera, as filmed by The Good Doctor:

There could have been no one else more fitting for the primetime singing slot than Sarah Brightman at this event. I don’t mean this as a putdown. Her rendition of Phantom was polished and suave in the way a Sarah Brightman song always is. But who else could China’s culture bureau have called for such a favor? Watching this show — and the likes of Zhang Yimou, Jackie Chan, Jay Chou struggling in their seats to stay engaged — I was severely reminded that guanxi is a zero-sum game: you occasionally benefit at another’s expense, but you’re not exacting paying it forward; you’re giving it right back, at a time to be determined. The establishment will make you rich and famous, but when they hold a vanity project to honor small-time films with huge lights and a red carpet, you better show up in an ironed tux and pretend to love every second of it. Every last second. You better. 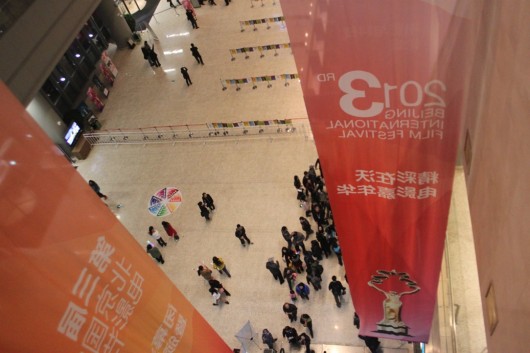 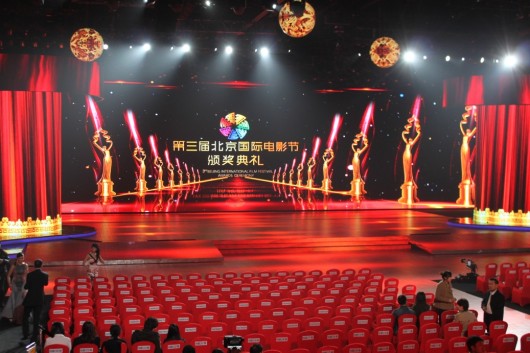 - Back to 1942 won the Best Feature Film award. If you thought a foreign film was going to beat out this domestic war epic by popular director Feng Xiaogang — China’s Spielberg, the anti-censorship guy – you really have no idea how Chinese awards shows work, or their purpose. 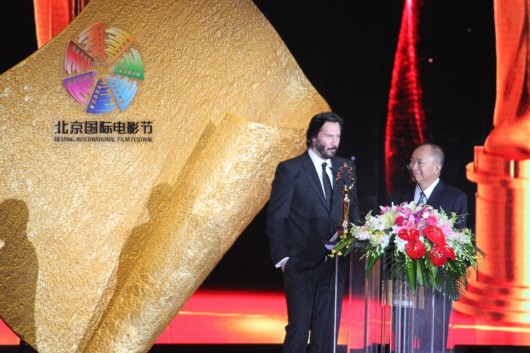 - And for some reason, Luc Besson was also there. If you have any doubt that he was the highlight of the night, you aren’t reading the right review. He was paired with Jackie Chan, who probably drew the loudest ovation, but this moment definitely drew the biggest laugh:

- Jackie Chan looks like he had a tough time reading the card too. What’s up with that? Did organizers use Monotype Corsiva as a font? Is simplified Chinese that much harder than traditional?

- Incidentally, I also happened to get a chance to put on my paparazzi cape and follow Chan and his wife around for a minute:

- Is there anything sadder than a mascot without a head? How about five of them? 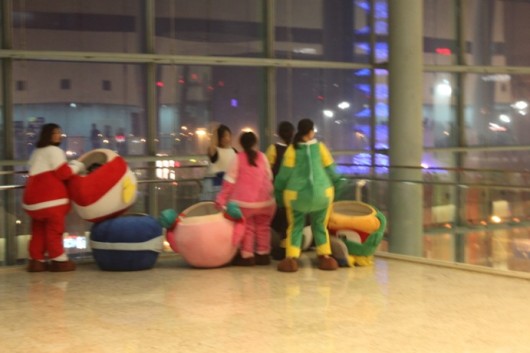 - The trophies were called “Tiantan,” i.e. Temple of Heaven. They were shaped like Temples of Heaven, which was a cute touch.

- All the stage performers were really quite impressive.

- A movie called Inch’ Allah won the Special Jurors Prize, and the woman who accepted the award was a French actress whom the cameras seemed to find all night. I wonder why. What possible reason… 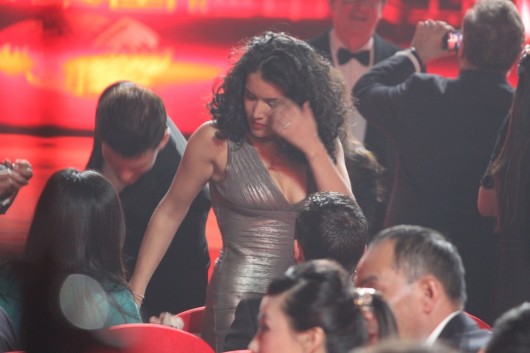 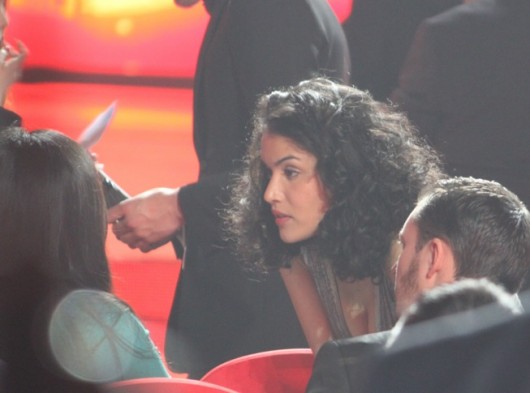 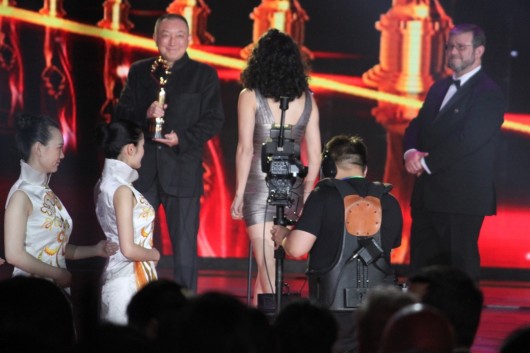 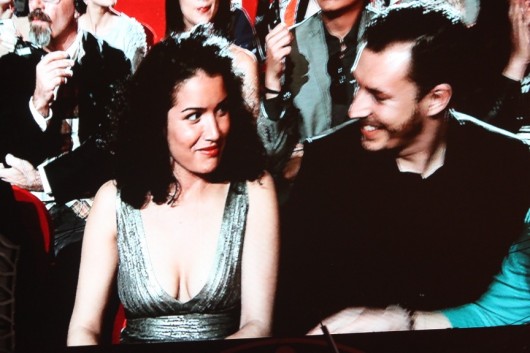 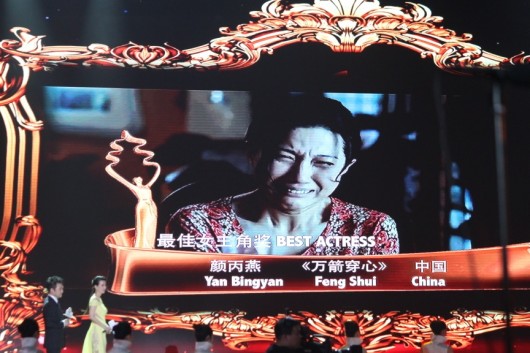 - What the… “Zhao Ziyong, the deputy director for Beijing Film & TV Bureau, announced that the Beijing Film Market achieved 27 projects valued at 8.731 billion yuan, an increase of 65.58 percent over the previous year, and is the largest amount in the history of the Beijing Film Festival.”

- Remember Liz Watts? She’s the one who seemed incredibly disgruntled every time Lore won — and Lore won twice — because it meant she’d have to get up out of her seat to accept a trophy for someone else? The Good Doctor and I bumped into her in a hallway afterwards. I asked for a picture. “Really? Why?” she asked, flabbergasted. She was also obviously in a rush. “I’m late for a meeting,” she said. Still… 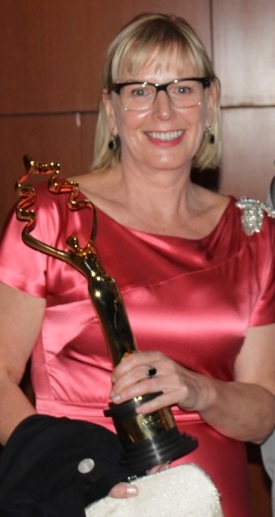 That made the night all worth it.

- No, sorry… this made the night all worth it: 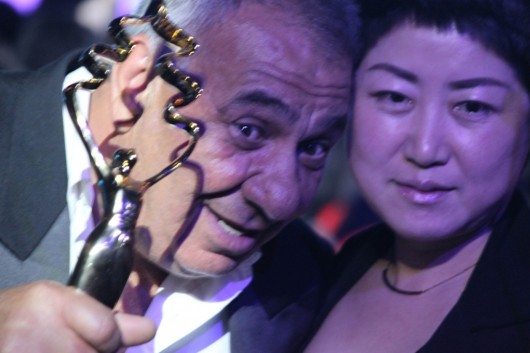 Vahagn Simonyan, I didn’t know who you were last week, but you might be my favorite Armenian actor of all time.

- The entire show on Youku:

One Response to “Acrobats, Miscommunication, And Luc Besson At The 3rd Annual Beijing International Film Festival”