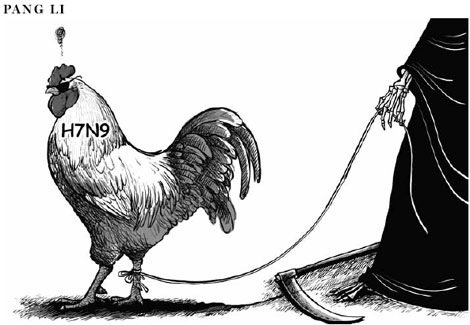 Your H7N9 avian influenza roundup, because there’s too much for the links post. We now have at least 18 cases of bird flu, by the way.

A 64-year-old man in Shanghai became the seventh Chinese who have died from the H7N9 avian flu, local authorities reported on Monday.

H7N9 Cases Rising by an Average of Three a Day:twitpic.com/chw411

But good news! “China has approved a new type of flu drug that it believes may be effective in treating H7N9 bird flu virus.” (Xinhua)

And recovery is possible. “A four-year-old boy who was confirmed to be infected with the H7N9 bird flu on Thursday has recovered, a disease control and prevention official said Monday.” (Xinhua)

Confidence matters, maybe. “China is confident it can control an outbreak of a new strain of bird flu, a senior Chinese health official said on Sunday as the World Health Organization (WHO) said there had now been 21 human cases of the H7N9 flu with six deaths. // China has said it is mobilizing resources nationwide to combat the new strain, monitoring hundreds of close contacts of confirmed cases and culling tens of thousands of birds where traces of the virus were found.” (Reuters)

China closes Nanjing poultry market. “In response, Chinese authorities have extended a ban on poultry trading to the city of Nanjing, having earlier closed markets in Shanghai. // China’s state-run news agency Xinhua said authorities had already culled tens of thousands of birds at two Shanghai poultry markets, where traces of the virus had been found earlier in the week. // Local officials in Nanjing said the virus had not been detected at its poultry markets, suggesting the trading ban is a precaution.” (BBC)

It appears that weibo posts about #H7N9 are being deleted as quickly as the disease is spreading: freeweibo.com/en/weibo/H7N9 One Response to “Bird flu roundup: 7th death reported, with escalating infections, but there is some good news”