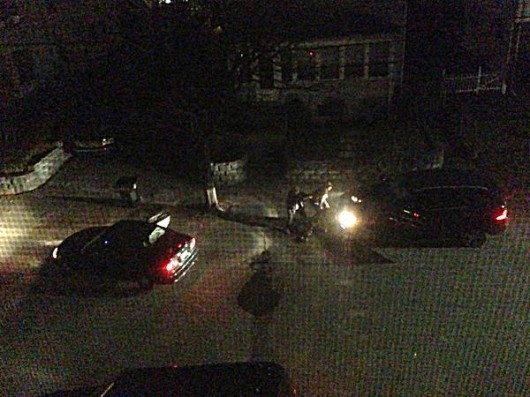 Last Thursday at 11 pm, a 26-year-old Chinese man parked his new Mercedes on Brighton Avenue. What happened next, we’ll let the Boston Globe tell it.

A man in dark clothes got out [of an old sedan that swerved behind him] and approached the passenger window. It was nearly 11 p.m. last Thursday.

The man rapped on the glass, speaking quickly. Danny, unable to hear him, lowered the window — and the man reached an arm through, unlocked the door, and climbed in, brandishing a silver handgun.

“Don’t be stupid,” he told Danny. He asked if he had followed the news about Monday’s Boston Marathon bombings. Danny had, down to the release of the grainy suspect photos less than six hours earlier.

“I did that,” said the man, who would later be identified as Tamerlan Tsarnaev. “And I just killed a policeman in Cambridge.”

The entire story is worth a read, but here are the highlights: Danny is from a central China province, attended graduate school at Northeastern, is working on a startup, and has a secret crush in New York (“I think, ‘Oh my god, I have no chance to meet you again.’”). When the car pulled up to a Shell Food Mart, the Tsarnaev brothers split, and with older brother Tamerlan momentarily distracted, Danny made a run for it.

After a zigzagging trek through Brighton, Watertown, and back to Cambridge, Danny would seize his chance for escape at the Shell Station on Memorial Drive, his break turning on two words — “cash only” — that had rarely seemed so welcome.

When the younger brother, Dzhokhar, was forced to go inside the Shell Food Mart to pay, older brother Tamerlan put his gun in the door pocket to fiddle with a navigation device — letting his guard down briefly after a night on the run. Danny then did what he had been rehearsing in his head. In a flash, he unbuckled his seat belt, opened the door, stepped through, slammed it behind, and sprinted off at an angle that would be a hard shot for any marksman.

“F—!” he heard Tamerlan say, feeling the rush of a near-miss grab at his back, but the man did not follow. Danny reached the haven of a Mobil station across the street, seeking cover in the supply room, shouting for the clerk to call 911.