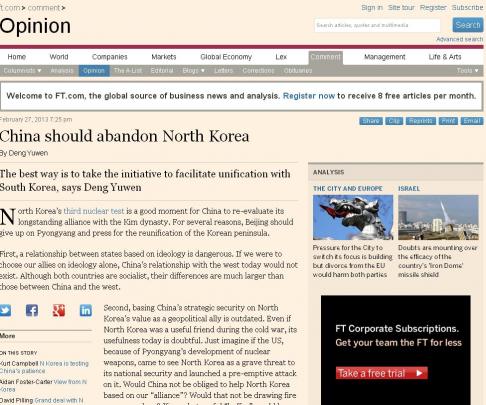 If you’re a Chinese journalist, writing in English won’t necessarily shield you from the petty decisionmakers and censors in the central organs of China’s bureucracy, as Deng Yuwen can tell you. Writing in the Financial Times on February 27, Deng, the deputy editor of Central Party School-affiliated Study Times, suggested that China should “re-evaluate its longstanding alliance with the Kim dynasty.”

And now he has been suspended, as he informed South Korean paper Chosun Ilbo:

“I was relieved of the position because of that article, and I’m suspended indefinitely. Although I’m still being paid by the company, I don’t know when I will be given another position.”

Deng said the Chinese Foreign Ministry was “very upset” by the article and made a call to the Central Party School to complain.

SCMP reports that he “told a close friend that the suspension could last for a month, the friend said.”

We’ll note here that our headline is slightly misleading. Deng is not alone in the opinion that China should abandon its ally of a bygone era. It really isn’t the Cold War anymore, with Democracy fighting Communism, and North Korea is no longer a necessary buffer between global superpowers US and China — indeed, it often seems the DPRK itself no longer cares to play that role. It’s an autonomous nation-state, after all, and so what if China gave them their desperately sought autonomy, or at least encouraged them to step up to the adult’s table?

A reasonable opinion — and not one you’re allowed to express, apparently. At least we now know the Chinese foreign ministry’s stance on this matter. 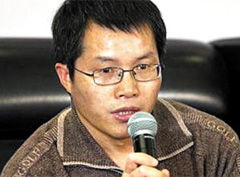 (The top screenshot was also taken by SCMP; it seems someone at that office doesn’t have a subscription to Financial Times!)

One Response to “At Least One Chinese Journalist Thinks The Country Should Abandon North Korea. He’s Been Suspended”