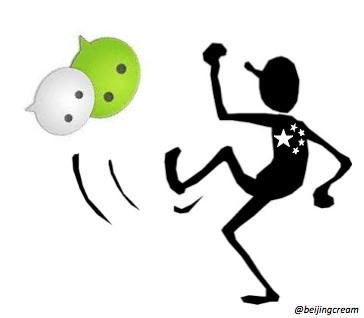 In China, if you can’t beat them, call upon your buddies in a high-ranking ministry to bring them down to your level.

On March 28, an official in the National Development and Reform Commission called for Tencent to charge WeChat users. According to SCMP:

Shi Wei, a director at the commission’s Institute of Economic System and Management, made the following controversial comments during an interview with Xinhua:

And as Tea Leaf Nation reports, CCTV posted a Sina Weibo message yesterday that suggests the Ministry of Industry and Information Technology may be actively trying to alter Tencent’s business model:

Head of the Ministry of Industry and Information Technology (MIIT) Miao Wei has stated that the MIIT is currently considering whether to require [Tencent], the operator of Weixin, to implement a fee on [the service]. They have already asked operator [Tencent] to submit a [plan] to the Ministry. [Mr. Wei] also stated that fees in addition to data fees paid to telecom operators are entirely reasonable, but the supervising bureaus can [view the matter] from the users’ perspective, [so although] fees on Weixin are possible, they will not be onerous.

To be clear, neither the NDRC nor the MIIT care about helping Tencent make money. They simply want to erect a paywall that, even if not “onerous,” will assuredly cause WeChat to hemorrhage users. It’s the Great Firewall logic: one merely needs to make it inconvenient for users to freely access something and many of them will stop trying. Newspaper publishers can also tell you about viewership dips once online paywalls go up.

Weixin’s rapid growth may have cannibalized SMS [text message] fees for China’s mobile providers; in 2012, Caijing magazine reported that “the number of SMS messages sent by China Mobile users witnessed record low growth in 2012.” With its powerful voice communication features, Weixin may also have taken a bite out of the operators’ voice fees.

Oh well. Nothing to be done.

4 Responses to “Chinese State-Owned Telecoms Feel Threatened By WeChat, Call Upon Powerful Ministry To Weaken It”