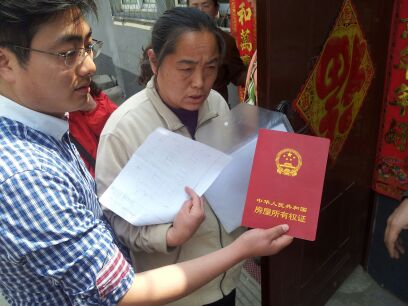 Chengguan are not technically police officers, but out in the streets, their word is law. Today, we got a sobering reminder of that in Beijing. As reported by That’s Beijing, “around 30 to 50 chengguan, along with 20 xieguan officers (‘associate management,’ a force subordinate to chengguan – essentially, hired muscle) blocked off Xuezuo Hutong behind Zhangzizhonglu subway station, allowing the crews to dismantle six apartments nearing completion, claiming their records indicated the two-storey structures were illegal.” Who or what gave these chengguan the authority to do such a thing, when the residents of the apartments claimed they had the proper documents?

Please, step into the rabbit hole…

When asked whether they were acting according to protocol and if residents have legal channels of recourse, chengguan officer 0212180 said: “They have papers, but that doesn’t mean they’re real. There’s a lot of agencies that provide false documentation – and even if they have real documents, it doesn’t mean they [the documents] were processed legally.”

Got that? You can have papers, but that doesn’t mean anything. And even if your papers did mean something — are “real,” i.e. stamped, sealed, maybe even signed – it still doesn’t mean anything, because “it doesn’t mean they were processed legally.” There it is, rule of law in China, summarized in one quote. It’s only too perfect that it came from the mouth of a chengguan — these fellas.

3 Responses to “Chengguan: “Even If They Have Real Documents, It Doesn’t Mean They Were Processed Legally””