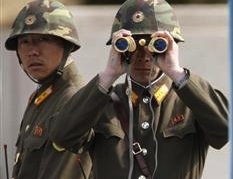 North Korea now apparently cares about foreigners, if its recent warning to those in South Korea is any indication. Via Reuters:

North Korea warned foreigners in South Koreaon Tuesday to quit the country because they were at risk in the event of conflict, the latest threat of war from Pyongyang.

…”We do not wish harm on foreigners in South Korea should there be a war,” said the KCNA news agency, citing its Korea Asia-Pacific Peace Committee.

Correction: North Korea does not care about foreigners, unless it’s convenient for the issuing of another toothless threat. Embassies in South Korea have reacted to the message by ignoring it:

Few embassies in Seoul have advised their citizens to quit. The United States, which has also been threatened by Pyongyang, has said there were no imminent signs of threats to American citizens.

Pyongyang has shown no sign of preparing its 1.2 million-strong army for war, indicating the threats could be partly intended for domestic purposes to bolster Kim jong-un, 30, the third in his family to lead the reclusive country.

Although another troubling development has arisen, which is the suspension of the Kaesong Industrial Complex, operated jointly by the North and South. The Washington Post’s Max Fisher pointed out last month that as long as Kaesong is up and running, it was a “very good sign that North Korea is bluffing about war.” And when it’s not up and running?

A factory complex that is North Korea’s last major economic link with South Korea was a virtual ghost town Tuesday after Pyongyang suspended its operations and recalled all 53,000 of its workers as part of its recent war-like posturing.

The work stoppage at the Kaesong industrial complex, the biggest employer in the North’s third-biggest city and a source of much-needed hard currency, shows that Pyongyang is willing to hurt its own shaky economy in order to display its anger with South Korea and the United States.

North Korea is willing to cut off its nose to spite the face. Would it kill itself to take that spite to its logical conclusion? A preemptive attack will result in nothing short of the obliteration of the Kim dynasty.

The smart bet is still on no.

Meanwhile in China, it appears that an online campaign has begun for the release of activist Liu Yuandong, who dared to participate in a protest condeming North Korea’s nuclear test. Via SCMP:

Liu, 36, was detained in February after he participated in a protest in the provincial capital of Guangzhou condemning North Korea’s nuclear test. His arrest has incited a movement online.

In one photo, a group of seven men are seen at night holding a white banner with black handwritten characters. “What crime has Liu Yuandong committed when protesting against the nuclear test?” the banner said. “We ask the authorities to release him without charges.”

Friggin’ North Korea. Threatening the international community is one thing, but now that its actions are directly causing citizens of other countries to lose their freedoms… fuck.

Actually, to think of it — this doesn’t reflect very well on the government of this country, does it? Pick your side wisely, China. You don’t want these Seth MacFarlane words spoken about you and Kim Jong-un: Oh, so you’re on his side?