The above is a shortened video, cropped just before we see rescue workers pull the deceased driver out of his squashed vehicle. The full-length version, slightly graphic toward the end, is embedded below.

At 6 pm yesterday in Mianzhu, Sichuan province, a truck loaded with sand approached an intersection — a red light — too fast, and lost control. A red sedan — the unluckiest vehicle in China — happened to be waiting at the stoplight when the truck flipped onto its side and fell directly onto it, smashing it flat as a pancake. The sedan driver did not survive, because: 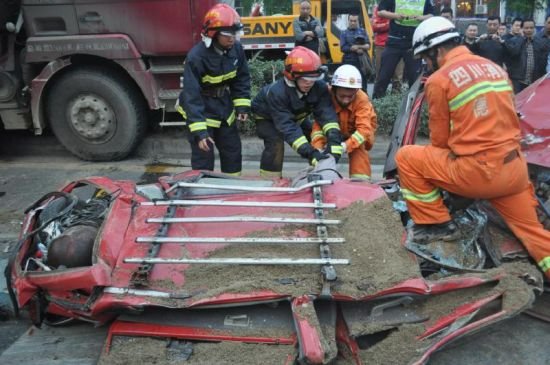 China Car Times has identited the flattened vehicle as a Second Generation Suzuki Auto, first produced in China in 1988. Police have detained the truck driver and are investigating the incident.