This piece is republished with permission from the Anthill.

I don’t generally post news on the Anthill, as it’s designed for narrative writing and there are too many China news aggregators anyway. But this is breaking news I discovered myself and have to share: the municipal authorities for the Gulou area of central Beijing have, as of midnight last night, made riding fixed gear bicycles in the area against the law.

I found this out last night when out on the town with a friend who was wheeling his fixie down Guloudongdajie. A policeman stopped us, inspected the front of my friend’s bike, then shook his head and said we were to come with him. At the police station on Baochao hutong, he pointed out a notice plastered outside, outlining the new regulation.

We couldn’t believe our eyes. Fixies have been made illegal due to “safety concerns,” and there is a 500 RMB fine for riding one in the Dongcheng district. We badgered the policeman for more information, and he (grudgingly) fetched someone else who told us that fixies were not safe (“不安全”) because of their simpler mechanism with no gears and no brakes.

This is patently ridiculous for so many reasons. For starters, it’s only a certain kind of fixed gear bike that doesn’t have brakes. But that’s beside the point. If you’re going to pass a law to protect cyclers, make it mandatory to wear a bloody helmet and have bike lights. It’s like addressing food safety concerns by outlawing eating while walking down the street.

Frankly, this seems directed at the expat population. Fixed gear bicycles are popular in this area of Beijing, and mostly among foreigners. There’s a store on Wudaoying hutong which specialises in them. Poor guys, I guess they’ll be “asked to tea.” What will Beijing’s hipsters be reduced to? Are they going to outlaw Fei Yue trainers next? Or maybe brunch?

My friend wrangled his way out of the fine by arguing he wasn’t riding the bike but walking it along the street. But this is disturbing news. Everyone please be careful, and leave your fixie at home today. 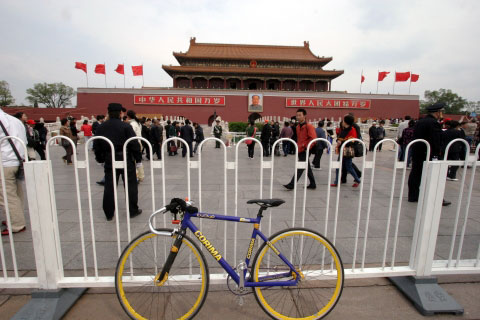 Alec Ash, a writer and freelance journalist in Beijing, is the founder of the Anthill.