Our guests this week aren’t local per se, but Beijing honararies by virtue of their attendance at last month’s Bookworm International Literary Festival. Writers from around the world converged on the Bookworm from March 8 to 22, but two were intrepid enough to plant themselves in front of our cameras’ uncomfortably hot lights to field ridiculous, droll questions such as, “What is your favorite bar game?”

Sophie Cookie is the author of the novels Under the Mountain (2008), inspired by the author’s childhood home in Kilmahog, and The Glass House (2004), which was shortlisted for a Saltire First Book of the Year Award. She also writes about her globe-trekking adventures for the Guardian (Portland made a good impression). Purportedly Scottish — currently living in Edinburgh and running the Skriva Writing School – Sophie was strangely unable to distinguish between highland and Speyside single malts, though we won’t hold it against her. For the record, “getting home” is her favorite bar game. After which, swimming… apparently. 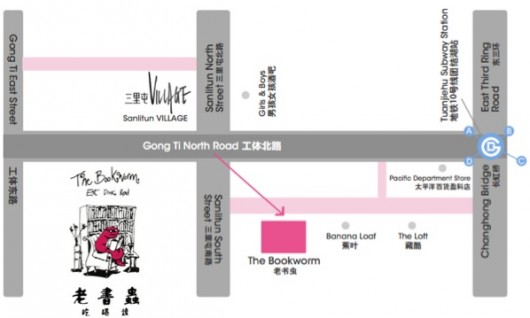 Edited by Gabriel Clermont (@gabrieltrane). Special thanks to Kadi Hughes and Mengfei Chen of the Bookworm. Follow Sophie Cooke on Twitter @MissSophieCooke.