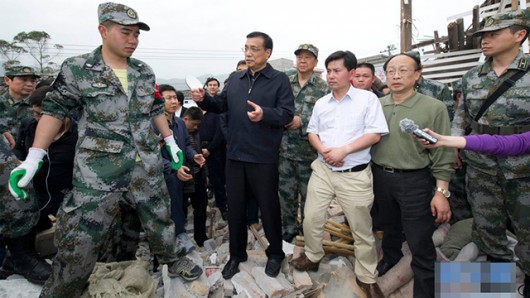 Check out the missing watch on the official next to Li Keqiang, via Shanghaiist

A loaded links edition today, with a couple of extra images. We’ll have some more fresh stuff for you in a couple of hours.

Losing an only child. “The mention of Ms. Lu’s singleton status often came in passing, or just in a headline, without going into detail in the text. The mentions came even in media that is tightly aligned with the Communist Party and state, such as the Communist Youth League’s news Web site, news.youth.cn. It’s a subject that is discussed in China, but remains politically sensitive, since it’s the direct result of the state’s “one child policy,” which began around 1980 and limited many families to one child. // There’s even a word for this special pain here: ‘shidu,’ or ‘lose single.’” (Rendezvous, IHT)

Some agencies have pegged the death count at 203: “Twenty-four hours later he was dead, his mangled body sprawled out under a red and blue tarpaulin at the edge of a country road in a remote corner of southwest China. // A handwritten placard above his final resting place read: ‘The blood and tears are as moist as the earth beneath the coffin.’ // ‘He was a nice boy. He was very obedient,’ wept his 38-year-old mother, Yue Yincui, as her grieving family huddled in the darkness around the improvised roadside shrine. ‘He was my only son.’ // The teenager is one of at least 203 people who are known to have lost their lives when China’s worst earthquake in three years struck Sichuan province on Saturday morning, at just after 8am.” (Malcolm Moore, The Telegraph)

A fine line between superstition and religion, eh? “China is struggling to get its estimated 100 million religious believers to banish superstitious beliefs about things like sickness and death, the country’s top religious affairs official told a state-run newspaper.” (Reuters)

Blackstone founder Stephen A. Schwarzman creates China scholarship. “A U.S. private equity tycoon on Sunday announced the establishment of a $300 million endowed scholarship program in China for students from around the world, billing it as a rival to the Rhodes Scholarship. // …Both President Obama and Chinese President Xi Jinping sent congratulatory letters, which were read aloud at the announcement ceremony at the Great Hall of the People — China’s symbolic heart of political power.” (AP)

Red Cross China strikes back. Well, strikes something. “Taiwan’s Red Cross organization on Monday rubbished a press report that its mainland counterpart had demanded it pay a hefty ‘admission fee’ before its volunteers could lend assistance in post-quake Sichuan Province. // The organization said the report is ‘misinterpreting, misleading and totally untrue.’ // Taiwan’s Red Cross organization announced on Saturday that it will donate 5 million yuan (809,000 U.S. dollars) to the southwestern mainland areas rocked by a 7.0-magnitude earthquake earlier in the day.” (Xinhua)

Midi Festival will be in Pinggu district this year. Shit. “How might a road-hardened devotee of Midi Music Festival be expected to react when told this year’s event is relocating from the Shunyi Olympic Rowing and Canoeing Park (a last-minute relocation in itself from Haidian Park) to one of the furthest outer-regions of Beijing? Probably not with shock, disappointment or even mild aversion because since 2000, Midi Music Festival has changed locations seven times. And so far, nothing has kept fans from going with the flow for the sake of the show.” (Global Times)

Official begs for forgiveness. “A Jiangsu government official knelt down in front of a crowd of angry locals and begged for their forgiveness after it was revealed that he had been using public funds on a luxurious meal in a restaurant, Xinhua reports.” (Shanghaiist)

The battle for a red can. “Feng Zhimin, a senior executive at Chan’s firm [Wanglaoji], says they are almost ready to throw in the towel on legal action. ‘If we lose this case again, there is no justice. We will give up,’ he says.” (Caixin Online)

After Xi's vow to snag corrupt "tigers & flies," police crack down…on those who took him at his word. http://t.co/uByfnSPxeP

Checking in on bird flu. (Xinhua)

The things migrant workers carry on tricycles and wheelbarrows — digitally altered photos by Alain Delorme (via Fast Company via Shanghaiist): 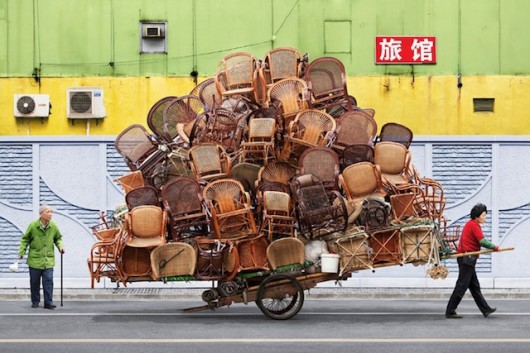 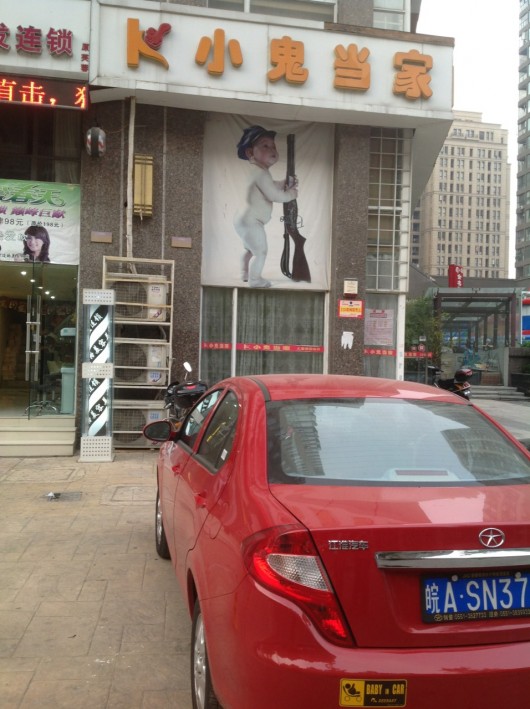