Pyongyang hosted the 26th annual Mangyongdae Prize International Marathon on Sunday, featuring a reported 251 runners, including 14 from countries such as Ukraine, the Czech Republic, Zimbabwe, Kenya and Ethiopia. The event was part of the country’s ongoing celebrations for Kim Il-sung, whose birthday is today.

Simon Cockerell, the General Manager of North Korea tour specialists Koryo Tours, told NK NEWS that unlike many other international marathons, the annual Pyongyang event is not open to applications from amateur runners.

“Application is made through the sports committee in Pyongyang, who are notoriously bad at answering emails. Usually I think they approach sports federations in countries they have contact with to ask them to send runners…The qualifying time is very fast indeed, something like 2:40 for men.”

It looks like Kim Il-sung won the marathon with a time of 1:35:12, shaving a full two seconds off his previous record. He is represented in the corporeal form by Ethiopian runner Ketema Bekele Negassa. 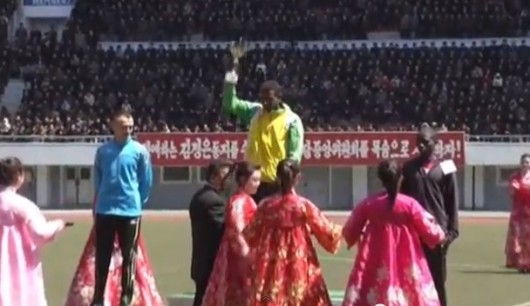 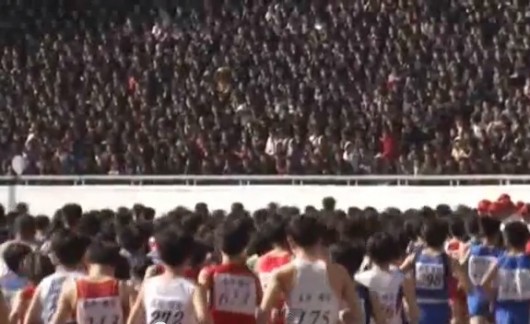 Back in 2001, the Financial Times (!) apparently was one of the sponsors of the race, as North Korean watcher Marcus Noland recalls. Despite tensions, the race went on as scheduled yesterday, as if the DPRK did not, just a few days before, threaten to blow up Washington, Colorado Springs, Los Angeles and Honolulu with KN-08 missiles. “One more sign that the North Koreans are bluffing (or have utter disregard for the safety of really fast Kenyans) will be the running in a few hours of the Pyongyang marathon,” Noland writes.

Meanwhile, Dennis Rodman is heading back to Pyongyang on August 1. Please remain not taking North Korea’s threats too seriously, folks.