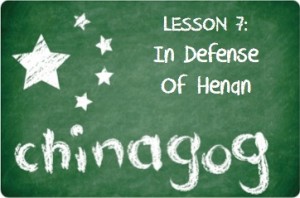 Anytime anything bad, weird or completely fucked up happens in China, I hold my breath for the inevitable mention of Zhengzhou, Sanmenxia, Zhumadian or any of the horror-story prone towns and cities around Henan. Historically, the province has known many sorrows, including around a billion earthquakes and Yellow River floods. In more recent history, it was completely flooded by Chiang Kai-Shek to stop the Japanese, subjected to crippling famine and food shortages during the Great Leap Forward, witness to the greatest dam disaster in human history, and, more recently, exposed for its corrupt blood drive creating villages with staggering AIDS infection rates. Henanese are labeled by foreigners and Chinese alike as dirty, filthy thieves, and any weird news story usually has the prescient follow-up, “Why am I not surprised this happened in Henan?” as the first comment.

Now that that’s out of the way, here’s what I actually came here to say: Henan is an amazing place filled with awesome people and jam-packed with cool (and sometimes perfectly weird) shit to do and see. It’s far from perfect, but it doesn’t deserve the horrific reputation it’s earned, and I think it’s essential for telling the story of China, past and present. Three or four of the (disputed) ancient capitals of China were located there, and if you like history, there’s thousands of years of it on display in the province. It’s also the most populated province in China, and strikes the most perfect balance between cosmopolitan, developing China and the rural lifestyle that has held for umpteen centuries.

Henan makes a lot of bad first impressions. A lot of travelers use Zhengzhou — my adopted Chinese city — as a base of operations, as, since it’s a major rail hub, taking a train there makes a lot of sense. The train station is an armpit. It’s dirty, crowded, and populated with beggars, taxi touts and blatant counterfeit peddlers. When my parents visited me there, we were strafed by two of the resident taxi queue beggars. As a group of four white people, we were apparently easy targets, and I did my best to politely keep the interlopers at bay. One man was handless and would pop over the barrier with a bag hanging from his stumps, exhorting in (my imagined) lawyerese, “Ladies and gentlemen of the taxi stand: as you can see, I have no hands. Please deposit currency in this bag.” Another old lady shuffled around the line trying to annoy those of us waiting for a cab for money. I gave her a few yuan and told her to please leave my parents alone. She took my grimy bills and ignored my request; the others in the queue politely asked aunty to leave my parents alone. Anytime I went to the train station I was stressed out and watching my bags, and going there with my parents was an exercise in overprotective bum-deflection.

But once you move away from the congestion of downtown Zhengzhou and Erqi Square (the supposed center of the city), things start to get better. The choking pollution dissipates a little. Most of the city is criss-crossed by nice, tree-lined streets. Walking through the neighborhoods can be a lot of fun, and, especially after the start of spring, there are spontaneous street food places everywhere you look. I know that’s pretty typical of China, but Chinese street food is one of the things I severely miss, and I never had a complaint about Henan’s.

Henan cuisine isn’t super-famous (or particularly amazing, but return-to-here-noodles are an amazing comfort food), but there’s a great deal of culinary selection from the rest of China. It actually – gasp – resembles most nicer third-tier cities around the country! The place for 羊肉串, 炒面 and street oysters is the smoky alley next the McDonald’s at 黄河路经七路. I had an amazing (amazing!) Indian restaurant there, but apparently they’re out of business. My favorite 油泼面 restaurant ever has apparently sold out, but the city is still apparently a great street food destination. And outside of Zhengzhou, my trip to Xinyang was the best culinary/tea trip I’ve ever taken.

A quick note on Henan being the stereotypical scam center of the Middle Kingdom: In two years there I was the target of a poorly executed scam exactly twice. Once was when a taxi driver loosened his cage thingy and tried to get me and my friends to pay for it when it fell down (a well-executed 妈了个逼 to the face from a fluent friend shut him up in a hurry). Another taxi driver forgot to shut off the meter and claimed that my Chinese was hard to understand, which might have been the case. Net loss: six dollars.

Otherwise the people were amazing. My boss only tried to skim a bit off my salary only once, and we were thick as thieves after we fist-bumped and she understood that I was a man with conviction. Every time I walked in to get my salary, I told her how much she owed me and she thew her hands up in adorable exasperation. “Oh well, Greg, I guess I have to pay you that much.” Then we’d both smile and laugh and I’d work on getting her to finance another staff KTV night. I still have a lot of friends there, and I will definitely be visiting Henan in the near future to tie up some loose travel ends.

If you’ve made it this far and I’ve even mildly changed your mind about the Middle Plains, let me make a few recommendations for things to do (and see) around Zhengzhou.

Erqi Square 二七塔 Actually, as mentioned above, you can skip this place. It’s just a bunch of shitty malls, choked traffic and a smog-stained throwback memorial pagoda.

North Tea Market 北茶城 This place is amazing. Out of the way and nearly hidden next to a flower market, the North Tea Market is home to hundreds of tea, tea-making and tea furniture stores. There’s a lot of different kinds of tea sold here, but most of the stores focus on Pu’er or (my personally most-abused substance) Xinyang Maojian (信阳毛尖). Every store will pour you unlimited samples of their wares (it’s polite to buy a token bag before leaving, but they will not give you a hard sell), and speaking with the clerks is a great way to practice Chinese. They spend their whole day making and drinking tea; sunnier dispositions I’ve never encountered before.

Henan Provincial Museum 河南博物院 Henan is the cradle of Chinese civilization, and this museum does an amazing job of documenting that history. Chock full of cool old shit if that’s your thing.

Zhengdong CBD 郑东区 A skyscraper farm just to the east of the city, the CBD was a lot of interesting when it was basically a ghost town consisting of hundred of tall buildings and a half-finished hotel. Less interesting now that it’s receiving more use for its intended purpose. There’s a nice lake there, too.

Food
Most of my favorite restaurants have closed, moved or changed their menu significantly in the last couple of years, so I don’t have any specific travel guide recommendations to make. Ask around and try the Huimian (回面). Haidilao’s as good here as in Beijing. There’s also a nice little street food alley behind the McDonald’s at Huanghelu and Wenhualu, but make sure to bring an iron stomach.

Drink
Target Bar 目标吧 经六路金水路
A gathering place for laowais. Owned and operated by the legendary Lao Wang (The Most Interesting Man in China), Target’s a fine place to get pissed for an evening. The mood gets sour when foreigners turn it into a bitter barn, but it’s one of the more consistent places

Bird Bar 鸟吧 经七路纬一路
This was my spot. It’s owned and operated by Snake, who has the craziest full-sleeve tattoo of any Chinese person I’ve ever met. The Long Island Iced Teas are some of the most potent I’ve ever tasted, and have almost resulted in me losing friends a couple of times. There’s a drink named after his girlfriend, Bottle Opener. It’s a foreign-feeling bar without any of the foreigners. Just for good measure, they stuck a picture of a pot leaf on the front door.

Anyone who has shit to say about Henan or Zhengzhou can come at me, bro, and I’ll give you a list of a dozen reasons why you are WRONG on the INTERNET.

7 Responses to “Chinagog: A Passionate Defense Of Henan, My Adopted Chinese Home”