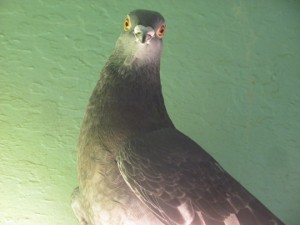 If you knew only these facts:

You would have to guess, would you not, that the businessman who bought it was Chinese? Because who else anywhere would have 100 K short of a half million to throw at a fucking pigeon?

The sale was conducted by the sport auction house Pipa. Its CEO, Nikolaas Gyselbrecht, had this to say to AP:

“One of the reasons there is no economic impact is that buyers are spread around the globe,” Gyselbrecht said. “Over 20 countries were bidding last weekend. So if there is a crisis in one country, it might be less so in another,” leveling out a downturn in Europe.

Nine of the 10 top birds went to China or Taiwan, “and the crisis is a lot less acute there than out here,” Gyselbrecht said.

Bolt — the fucking pigeon, not Jamaican sprinter — will be used for breeding, and apparently his offspring “will be used in the high-priced competitive races.”

There are high-priced competitive pigeon races.

But lest you think the Chinese are simply going to gobble up all the medals — or whatever punny verb we can use to describe a fucking pigeon’s intake of food — simply by throwing cash at high-priced free agents, we offer a different kind of bird as a caution: