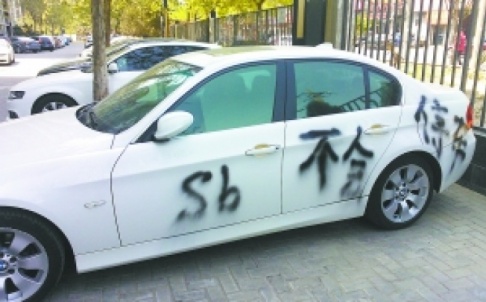 “Poorly parked BMW in Beijing spray-painted with insults,” via SCMP

So many good stories, so little time. Luckily, this links post. Hopefully we’ll see some of you at the That’s Beijing party happening now at the Hilton.

Sigh. “Where did the slogan come from? Quite possibly the New York Times. Last October, in the run up to Mr Xi’s ascension, the Times ran a column by Thomas Friedman entitled ‘China Needs Its Own Dream.’ Mr Friedman said that if Mr Xi’s dream for China’s emerging middle-class was just like the American dream (‘a big car, a big house and Big Macs for all’) then ‘another planet’ would be needed. Instead he urged Mr Xi to come up with ‘a new Chinese dream that marries people’s expectations of prosperity with a more sustainable China.’ China’s biggest-circulation newspaper, Reference News, ran a translation.” (The Economist)

Q: “Why do governments fear literature? Wouldn’t, say, the Chinese Communist Party be better off letting its writers write fiction without harassment?” “I’ve always thought of it this way: Politicians and creative writers both try and shape visions of society, they both try and offer to their readers or to the public a view of the world, or a vision of the world, and these visions of the world are at odds with authoritarian regimes. Those regimes attempt to shut down the limits of the possible while fiction tries to push out the limits of the possible. So in effect their visions are in opposition to each other.” (Salman Rushdie, interviewed by Matt Schiavenza, The Atlantic)

Gatsby, China edition. “Perhaps no work of fiction has returned to me more often over the past eight years in China than F. Scott Fitzgerald’s slippery tale of James Gatz of North Dakota, who thrust himself into a new world in desperate, doomed pursuit of love and ambition—a life in which the ‘dream must have seemed so close that he could hardly fail to grasp it.’ I’ve stood in Shanghai, bathed in the lights of a new skyline, and thought of Gatsby’s glimpse of New York, with ‘the city rising up across the river in white heaps and sugar lumps.’ And at times it’s been hard to think of anything but Fitzgerald’s ‘universe of ineffable gaudiness’—upon seeing, for instance, the Chinese boutique with the fabulously un-ironic English name: ‘PRICH: Pride & Rich.’” (Evan Osnos, New Yorker)

No foreign links in Xinjiang attacks. “Investigators found no foreign links to extremist violence in northwestern China’s Xinjiang region last week in which 25 people died, state media said Thursday, diverging from past claims that attacks there are orchestrated overseas.” (AP)

So young! “Ye Wocheng underlined China’s prodigious golfing talent as he teed off to become the youngest player in the history of the European Tour at the age of 12 years and 242 days.” (CNN)

Strawberry Festival, reviewed. “Alcohol wasn’t allowed on the festival grounds again this year, but by the third day it seemed readily available as security relaxed a bit. On that note, no outside food or drink was allowed in the site, which made for a miserable afternoon if you tend to easily become dehydrated in the hot sun. You were given a cup with your ticket for what we thought might be discounted water and coke, but we didn’t even manage to find out because the lines were too long.” (The Beijinger)

More festivals! “It’s May.. festival season baby! After the onslaught of MIDI and Strawberry, now we’re getting ready for the next batch including the CD Blues Festival. Unlike previous years where this was held over a day or two, Big John has gone with a completely different formula: Have special gigs every weekend of May.” (Beijing Daze)

A victory? “Chinese mothers have beaten Wall Street hedge fund managers in forcing a turnaround in the price of gold after it dropped last month.” (SCMP)

Survival’s good. “The final day of a Chinese holiday marked terror for more than 20 people who fell into a river when a suspension bridge tilted in a tourist town. All of them survived.” (New Straits Times)

Hm. “The United States should stop using religious issues to interfere in China’s internal affairs, Chinese Foreign Ministry Spokeswoman Hua Chunying said here on Thursday. // Following the publication of a damning U.S. report into religious freedom in China, Hua told a regular press briefing that the U.S. side should reflect on its own problems rather than pointing fingers at other countries and making irresponsible remarks.” (Xinhua)

“Girl in Guangzhou kidnapped, tied up and tortured for a month.” (The Nanfang)

Phonemica: Help us document and preserve China’s disappearing dialects while gathering the stories that need to be told.” (Indiegogo)

Via Not There Beijing: 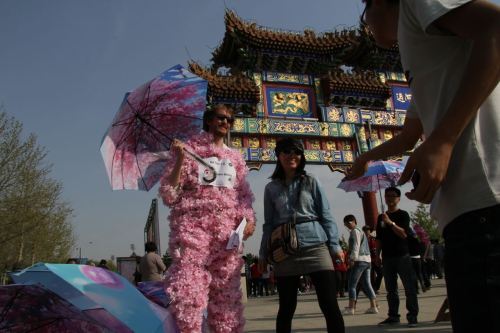