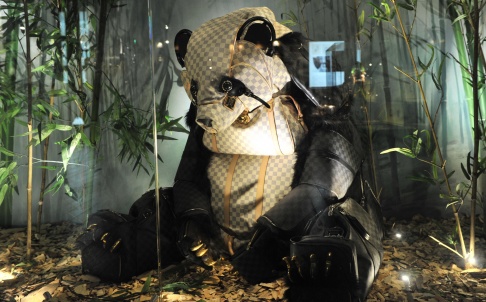 Via SCMP: “A giant panda made from 74 Louis Vuitton handbags and leather products by UK artist Billie Achilleos is on display at Wuhan International Plaza in Wuhan, in the central Province of Hubei.”

In Shanghai for a competition this weekend. But you’re in good hands with links.

Li Na is out. “Bethanie Mattek-Sands is famous for her outfits — she once wore a dress accented with tennis balls to a Wimbledon party — but after 14 years as a pro, including several rough, injury-riddled recent seasons, she doesn’t currently have a clothing sponsor. So Thursday she wore a sporty outfit with a black baseball cap, black knee-high socks and a green-sleeved baseball-style under-jersey. // She looked a little like a 1930s newsboy. But instead of delivering newspapers, Mattek-Sands delivered the biggest upset of this year’s French Open so far by beating the 2011 champ 5-7, 6-3, 6-2.” (ESPN)

An anniversay is coming up. That anniversary. “Relatives of victims of the 1989 Tiananmen killings have criticised Chinese President Xi Jinping for failing to initiate political reform. // The open letter, from the Tiananmen Mothers group, came ahead of the 4 June anniversary of the crackdown.” (BBC)

Ai Weiwei, in case you were wondering. “A Gala in Venice to Toast China’s Most Famous Dissident.” (T Magazine, NYT)

Yip. “A man in Wenzhou City, Zhejiang named Hai Bo (pseudonym) ran after an African student chopping at him with a knife. The student, with poor Chinese language skills, had no idea what was going on, and ended up suffering serious injuries.” (Education News China)

So many better single malts that aren’t this expensive. “The Macallan has been making single-malt whisky in Speyside, Scotland, since the early 19th century, but on Thursday it released a new product in Hong Kong. Called M and available in just 1,750 bottles, the line is made of whisky selected from aged casks and bottled in 1.5-liter Lalique crystal decanters. Each is priced at $4,500.” (WSJ)

Pork takeover. “China’s Shuanghui International plans to buy Smithfield Foods Inc for $4.7 billion to feed a growing Chinese appetite for U.S. pork, but the proposed takeover of the world’s No. 1 producer has stirred concern in the United States. // The transaction, announced on Wednesday, would rank as the largest Chinese takeover of a U.S. company, with an enterprise value of $7.1 billion, including debt assumption.” (Reuters)

“I was here” traces back, of course, to ancient days. “When a Chinese teenager named Ding Jinhao (丁锦昊) in Egypt last week was revealed to have defaced an ancient frieze with the graffito ‘I was here’ (丁锦昊到此一游), there was widespread condemnation of the teen vandal who did so much to damage the image of Chinese tourists abroad. Yet after conducting its own survey of the scenic spots in the province of Yunnan, the Spring City Evening News today reports that ‘I was here’ and other graffiti can in fact be seen all over Yunnan.” (Danwei)

The Onion on China buying American pork. (The Onion)

“It Isn’t Getting Any Easier to Get A Doctor’s Appointment in China.” (The Atlantic)

Use WeChat on the CPU. (The BJ Reviewer)

So, this is a statue of teenagers making out in Zhangzhou, Fujian province, via Shanghaiist 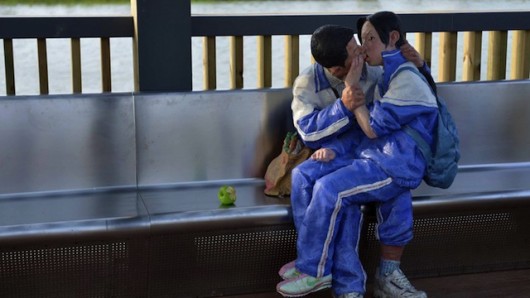 Via Foreign Policy, when the Globetrotters were in North Korea: 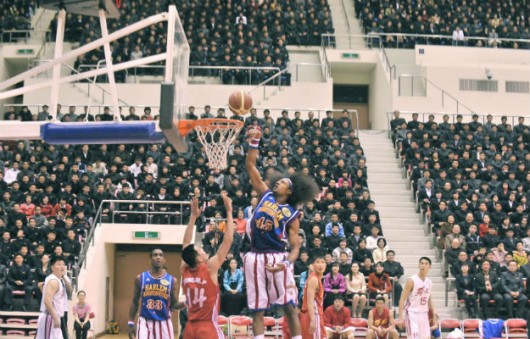