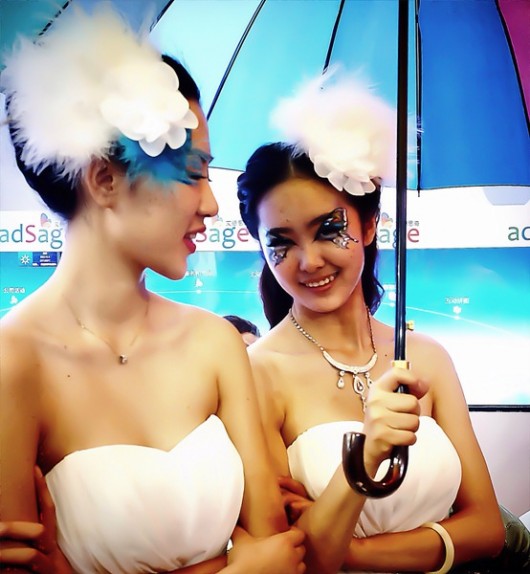 From the 2013 Global Mobile Internet Conference, by Frank Yu via the Beijinger

Quite the links edition today. Also, I just realized Wednesday was Fibonacci Day. Cheers to that!

Leave Mo Yan alone. “‘Whether or not I deserved the Nobel Prize, I already received it, and now it’s time to get back to my writing desk and produce a good work. I hear that the 2013 list of Nobel Prize nominees has been finalized. I hope that once the new laureate is announced, no one will pay attention to me anymore.’ // This is how 2012 Nobel laureate Mo Yan ended a recent speech at the 2nd Sino-Australian Literary Forum in Beijing, where he shared the stage with 2003 laureate J.M. Coetzee. No doubt Mo Yan is trying to end the debate on whether the Nobel selection committee had made the right decision in awarding the prize a Chinese author who does not comfortably fit the ‘dissident’ box.” (Tea Leaf Nation)

We’re not big fans of the Tiger Mom idea around these parts. “Kim also measured the outcomes for each of her categories. Supportive parents had the best developmental outcomes, as measured by academic achievement, educational attainment, family obligation (considered positive outcomes), academic pressure, depressive symptoms, and parent-child alienation (considered negative). Academic achievement and attainment were purely data-driven, while the latter four came from different assessments developed by academics over the years (the academic pressure rating is Kim’s own), which, while considered reliable, are inherently somewhat subjective. Children of easygoing parents were second in outcomes, while tiger moms produced kids who felt more alienated from their parents and experienced higher instances of depressive symptoms. They also had lower GPAs, despite feeling more academic pressure.” (Slate)

The sad end of Wonderland. “Wonderland, the abandoned, fairytale theme park that never was, has finally been torn down, the Beijing News has reported. // The beautiful ruins have been visible from the Badaling Expressway for over a decade, drawing curious stares and photography enthusiasts. Located near Chen Zhuang, Nankou Zhen in Changping district, Wonderland was intended to be one of Asia’s largest amusement parks.” (That’s Beijing)

Win prizes! Capture weasels on camera… “The photo we judge to be the best (and genuine) will win international acclaim from thousands of admirers – AND a hutong-based prize from one of our many lovely travel partners. It’s an ongoing contest and the Bespoke crew is going to be trying our damnedest to snap the beast too, so keep up with our progress on our Facebook site. // If you think you’ve caught the little fella on camera, you can post the image direct to our Facebook page, or email it to info@bespokebeijing.com with HUTONG WEASEL as the subject line.” (Bespoke Beijing)

Etc. “Acclaimed author Lionel Shriver thinks Beijing is ugly and accuses expats in this city of having perverse habits. She says so in this article from UK magazine Standpoint. Shriver, who was here for the 2013 Bookworm International Literary Festival, claims the atmosphere in Beijing was so thick and brown she could taste it.” (the Beijinger)

Someone’s been a bit busy… that someone is Zhang Yimou. “The brief Xinhua article followed local media reports, which China Real Time has been unable to confirm, quoting Wuxi officials as saying the 61-year-old director may have as many as seven children and could face fines as high as 160 million yuan ($26 million).” (WSJ)

With tributes. “Guan Minqing, a teacher for several of China’s first-generation princelings, including Bo Xilai, has died on Wednesday in Beijing at the age of 92.” (SCMP)

Brawl! “Eyewitnesses claim a drunken student from Xinghai went to a dormitory of South China Normal University and started shouting and swearing at passers by. After he squared up to a student from the university, fists started flying. // Things rapidly got out of hand and by the time police arrived, over 100 students were involved in the brawl.” (The Nanfang)

In defense of Chinglish. (Global Times)

Stephon Marbury may be too optimistic about Chinese basketball. (The Li-Ning Tower)

Baidu to Indonesia. (Tech in Asia)

Netherlands vs. China in Beijing on June 11. (the Beijinger)

Eating chicken like a boss, to promote chicken, via Shanghaiist: 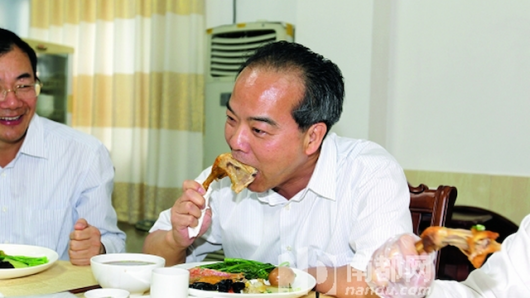