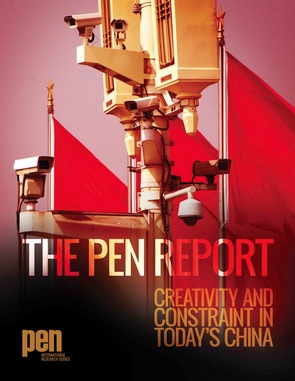 Do you share our disdain for censorship? If so, it’s not too late to check out last week’s PEN International report on Chinese censorship, “Creativity and Constraint in Today’s China.” Launched on World Press Freedom Day as a culmination of five years of work, “the report is a frank assessment of the climate of freedom of expression in the world’s most populous state,” featuring firsthand accounts and essays from 10 Chinese dissident writers.

Murong Xuecun was one of the writers. Here’s an excerpt of his essay as it appeared in the Atlantic:

In 1931, the magazine Middle School Students asked Lu Xun what he would say if he had a chance to talk with one of its readers.

Lu Xun answered that he would tell the student, “Let me ask you: do we have freedom of speech? If the answer is no, don’t blame me for not saying anything. If I must say something, I would say that the first step is to fight for freedom of speech.”

81 years after Lu Xun’s death, his works have been deleted from textbooks and the mission he passed on to future generations has yet to be accomplished. Generations of Chinese have fallen on this narrow and thorny road — but when they look back, they realize they haven’t walked far. When we open our mouths and talk what we’re fighting for is still the very right to speak.

Salman Rushdie, who appeared at the release of PEN’s report, was interviewed by the Atlantic last week and had this to say:

But I feel that, in the end, China does want to have a more significant role in international affairs, it does want to be seen as a big player in the world, it wants to have authority, it wants to have respect, it wants to be treated as one of the great voices in the world today. They’re beginning to be aware that their behavior is damaging their reputation, though, and I think if you put sufficient pressure on authoritarian regimes they often see that it is in their own self-interest to ease up on repression.

The report is accompanied by an open letter undersigned by more than 100 literary and cultural figures, including Ai Weiwei, Margaret Atwood, Paul Auster, Don DeLillo, Ian McEwan, which states in part:

We cannot, however, listen to China’s great and emerging creative voices without hearing the silence of those whose voices are forcibly restrained…. We cannot appreciate the accomplishments of Chinese creators across disciplines without thinking of the works we are not able to enjoy because of censorship in the arts, in the press, and on the Internet—or of the many otherworks that cannot be imagined or created because of these constraints….

Modern China is big, contradictory, heterogeneous, and protean. It deserves nuanced appraisal and, often, patience and understanding from those who study it. But not on this issue.

It is unbecoming for organizations to impose restrictions on creative and artistic expression; it is deplorable for governments to decree blanket embargos on topics they deem sensitive; yet in these cases, it is at least somewhat understandable, if not entirely justifiable, because freedom of speech, in the grander scheme of things, is a privilege rather than a right, one that only a minority of the world’s citizens can count themselves lucky to have. But it is downright dastardly and criminal for those with power to deprive a citizen of his or her livelihood simply for expressing an opinion. There is no room for nuance here. There is no understanding for those who would argue for Liu Xiaobo’s imprisonment, or his wife’s house arrest. We will continue to reserve our worst — our crudest language, most visceral anger — for those who are deepest in the sordid, stinking praxis of censorship, those who would eviscerate ideas, cyberbully, and bowderlize content. Yes, freedom of speech has its limits and is a privilege, but we believe in and will fight for, even in this smallest of ways.