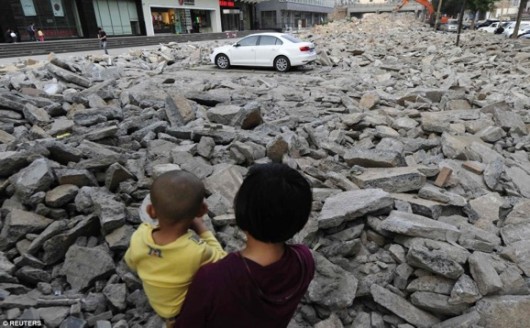 “Chinese builders give up waiting for driver and demolish multi-storey around his parked car,” via Daily Mail

China to help broker Middle Eastern peace? “The Chinese foreign ministry has offered to broker a meeting, according to the AP, between Palestinian Authority President Mahmoud Abbas and Israeli Prime Minister Benjamin Netanyahu, both of whom are visiting Beijing next week. // It’s a promising sign. Probably not for the Israel-Palestine peace process, which has demonstrated a remarkable ability to resist mediating efforts by more experienced and invested powers, but for China’s foreign policy. The offer, whatever comes of it, could indicate that China sees its role in world affairs evolving from that of an insecure outsider to the kind of responsible global power it wants to be.” (Washington Post)

Gamesmanship from the grave. “Fang Lizhi was not a ‘black hand’ behind the pro-democracy movement in 1989, he says in a newly published posthumous autobiography. // Rather, it was his innate character as a scientist – perseverance in pursuing the truth – that led him to be named China’s most-wanted man and forced him into exile, he writes. // ‘I hope my autobiography will help me to say clearly how I was guided by [the spirit of] science and democracy to the endless path of being the most-wanted man [by the Chinese authorities],’ the book’s cover quotes the distinguished astrophysicist as saying.” (SCMP)

Disconcerting. “Of the total number of North Koreans that flee into China annually, an estimated 80 percent  are women. The majority of these women become victims of sex trafficking.” (Sino-NK)

Officially charged with corruption, which carries a maximum penalty of death. This guy. “Graphic video footage of Lei Zhengfu, a district party chief in the southwestern city of Chongqing, and his mistress was widely circulated on the Internet, causing an uproar among microbloggers. Lei was later sacked. // Party officials are banned from having mistresses, and the video came to symbolize in many people’s eyes the excesses and corruption of the ruling elite. The case shows the party’s growing sensitivity to public anger against abuse of power and official impunity.” (Reuters)

Raise your hand if this surprises you. “On May 1, the PLA brought in a new style of military licence plate, promising it could not be fixed to vehicles costing more than 450,000 yuan (£47,000). It introduced the change to crack down on the private use of luxury cars bought with army money and on the illegal auctioning of military plates – which help people avoid tolls and being stopped by the police. // A day later, Xiao Ting, a host on China National Radio, posted photographs of a Volkswagen Touareg SUV, with a price tag of between 680,000 yuan to 1.1 million yuan in China, driving with the new plates.” (The Telegraph)

Snubbing the Queen… “China’s richest man, Zong Qinghou, may be known for his frugality, but he bailed on two free dinners in February, snubbing invitations from Britain’s Queen Elizabeth and Prime Minister David Cameron.” (SCMP)

to those who only focus on the bad side of Chinese football, I give you this — Beijing Guoan, it’s a family thing twitter.com/modernleifeng/…

Fuck up the giant duck interlude, via SCMP:

Substandard dictionaries given to 3 million students in Hubei province. (Sina)