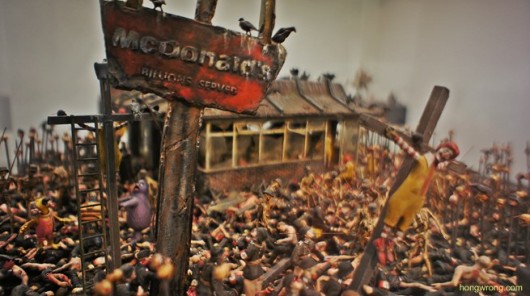 Via Hong Wrong: “‘The Sum of all Evil’ is part of a series of models and reworked paintings entitled ‘Hell’, currently exhibiting in Hong Kong…”

Traveling for a couple of weeks, so apologies in advance for posts that come in spurts, fits, links.

The Chinese brand problem. “In the race to be the world’s dominant economy, Americans have at least one clear advantage over the Chinese. We’re much better at branding. American companies have these eccentric failed novelists and personally difficult visionary founders who are fantastic at creating brands that consumers around the world flock to and will pay extra for. Chinese companies are terrible at this. Every few years, Chinese officials say they’re going to start an initiative to create compelling brands and the results are always disappointing.” (David Brooks, NY Times)

More repudiation for Chen Guangcheng. “But on Wednesday, one of the lawyers brought in by NYU to assist Mr. Chen’s transition to life in the U.S. rejected the notion that the Chinese government played any role in his imminent departure from the campus. // ‘His time at the university is simply coming to its conclusion, a conclusion that was determined long ago and that Mr. Chen has been aware of since shortly after his arrival in the United States,’ Mattie J. Bekink, Mr. Chen’s former special adviser, said in a statement sent to The Wall Street Journal. ‘I should know, since I am the one who told him about the length of his tenure at NYU.’” (WSJ)

Tombs? Who needs tombs? “Ancient tombs have been destroyed in Guangzhou and Jieyang as urbanisation and greed continue to ravage the country’s historical heritage. // Archaeologists discovered Saturday (June 15) that construction of the Guangzhou Subway line 6 had destroyed 5 ancient tombs.” (The Nanfang)

Lei Zhengfu trial. “Lei Zhengfu’s trial opened on Wednesday at the Chongqing No. 1 Intermediate People’s Court in southwest China. // The senior Chongqing official was removed from his post and held by police after a sex tape featuring him emerged online last year.” (BBC)

They didn’t already have a monitoring scheme? “China has completed a monitoring scheme in restive Tibet that requires all telephone and internet users to register under their real names, state media said on June 19, as part of a campaign to crack down on what officials describe as rumors. // Tibetans are already closely watched, due to decades of often violent unrest in protest at Chinese rule, which Beijing blames on exiled spiritual leader the Dalai Lama.” (Asahi Shimbun)

China won the Iraq War interlude, via The Daily Show:

Another story of chengguan. (That’s Beijing)

“Digital Music Sales in China Hit $75 Million (No, We Didn’t Miss Any Numbers).” (Tech in Asia)