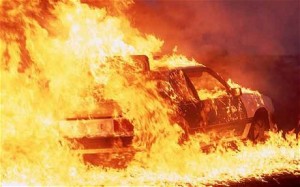 Breakups are hard. Setting fires to cars, then calling the police and saying some other guy did it, is one way to deal.

A young man living in an Urumqi apartment complex allegedly set fire to five cars over nine days after getting dumped by his girlfriend early one morning, iyaxin.com reported yesterday.

Zhang explained he ignited the cars by lighting a rag or washcloth in front of the front tire, under a gap in the chassis, and walking away.

After identifying Zhang on video, police pieced together that it was Zhang who had previously reported the fires, had shown up at the scene after police arrived, and even helped neighbors who had been injured by the fire. One neighbor called him a “good Samaritan.”

On one occasion, Zhang explained he had seen “a man in his 30s, about 1.75 meters tall wearing camouflage” in the complex.

James writes about music for That’s Beijing. (Picture for illustrative purposes only.)