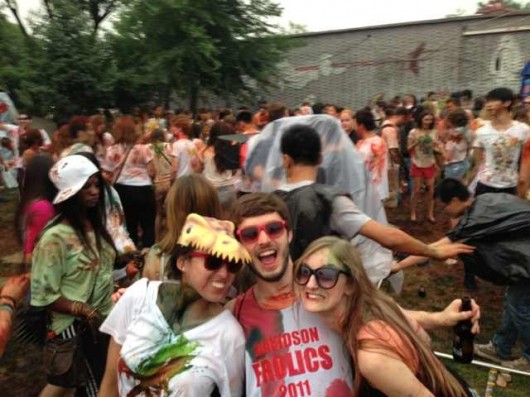 Let There Be House and Street Kids party in Beijing: Color Punch, via the Beijinger

Probably to be used to mine bitcoin. “Chinese supercomputer producer announced Monday that China has once again built the world’s fastest supercomputer, capable of performing 33.86 quadrillion operations per second, surpassing the U.S. Titan supercomputer.” (Xinhua)

Another big dog ban soon to be ignored: “A rule published by the Beijing Municipal Public Security Bureau on June 2 said dogs 35 cm in height or taller, or that are one of 41 breeds identified as violent such as bulldogs and collies, will be banned in designed areas, including central districts and some rural regions across the capital.” (China Daily)

Because that’s what we really need: undercover chengguan. “A picture of a man in chenguan uniform by day but selling mugs on sidewalks at night went viral on the Chinese Internet during this past weekend. To get why this is a big deal, one has to first know that chengguan, or urban management officers, are a special force of law enforcement in China that are generally considered as predators of street vendors.” (Offbeat China)

China’s newest city. “Over the next decade, China’s rulers plan to spend $6.5 trillion – the equivalent of nearly three years’ total output of Britain – on moving 400 million people from the country to its cities. Taking shape beneath a clutter of cranes are the high-rise flats that will make up one such project, known as Lanzhou Xinqu, or Lanzhou New Area.” (The Telegraph)

Welcome China’s rise: a rebuttal to Time’s cover story. “Hannah Beech is correct when she writes that it is important to understand how China sees the world. Over the past hundred years, China has seen the demise of a dynastic system that spanned millennia, the rise of a republic, disintegration into civil war, brutal occupation, and the birth of a Communist Party which, for all its blunders, has freed hundreds of millions from abject poverty. The Chinese language is a musical one, spattered with curious idioms which have grown out of thousands of years of vibrant folklore. The Chinese people are warm, generous, and hospitable. And in the coming century, China, along with our other developing neighbors, will rise to share the responsibilities of governing a peaceful world. It is in this spirit — not one of competition and fear — that we must come to understand the world according to China. ” (Policy Mic)

For better or worse, 'petting a Phoenix' is now and forever more THE favored & most delightful euphemism for 'spying for China.'

Xi'an International University student has challenged #China national team to a game via Weibo, offering to pay all expenses if China win!

Just arrived in Nanjing, China on a bullet train to play @KungFuKomedy in #FinnegansWake an Irish Bar owned by a Scotish Dude! for ex pats

Tongli Studio apparently has an opening, if you want to own a bar that goes bankrupt. (Beijing Boyce)