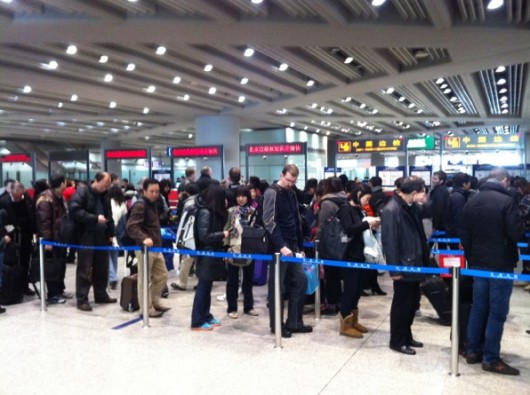 The Wall Street Journal revealed on Friday that China’s airports are the world’s worst for flight delays. “According to FlightStats, which tracks airport statistics, Beijing’s airport ranks dead last among the world’s top 35, with fully 82% of flights failing to leave on time,” WSJ reported. “Second worst was Shanghai, at 71%.” Numbers, numbers. We could link to a string of posts from our archives with picture and video evidence, but none of it will feel as real as our memories — after all, we’ve all experienced the particular nightmare of flying in China. Below, some of our stories.

July 4, flew into HKG from SFO at 6 pm, was then booked on the 8 pm Air China flight 112 to PEK. 8 pm was cancelled, so was switched to flight 114, previously delayed, now due to leave 8.30 pm. That was also cancelled, so I was switched to flight 110, previously delayed, now due to leave at 9 pm. We boarded at 9.30 pm, doors closed, told we had no take-off slot – could be 10 minutes, could be 3 or 4 hours. Right at midnight we left the gate and took off. Once we were in the air, captain told us that he got the call at midnight from Air China to cancel the flight and while he was on the phone, air traffic control gave him permission to take off. So he had to promise to Air China that he would taxi at double speed and then fly as quickly as possible to arrive on time. Issue was that if we had landed at PEK past a certain time, they would be given a hefty fine so that it would no longer have made economic sense to fly the plane.

This was all to get up to Ordos for work. Leaving Ordos was eventful: Group 1 left Sunday night, flight Ordos-PEK cancelled, so they drove to Baotou for another flight to PEK. Sat on the runway for many hours, finally left at 5 am, diverted to Shijiazhuang, then bus to PEK, arrived about noon Monday (missed all onward onnections to rest of Asia).

Group 2 (me) left on the 8.30 am Monday morning flight, half an hour delayed but back to PEK no problem, easily beating Group 1 back to PEK.

Groups 3 and 4 left on the Monday afternoon flight back to PEK, told all flights were cancelled and/or no time slots yet assigned. Group 3 chartered a bus for a 17-hour journey back to Beijing. Two hours later, Group 4 boarded and flew back to PEK.

What I’m getting out of this is cancellations happen sometimes.

As a former management consultant, I used to travel between Beijing and Shanghai every week for close to five months, leaving for Shanghai on Sunday evening or Monday morning and coming back to Beijing on Friday evenings. I’ve encountered my fair share of delays and flight cancellations (and, consequently, fights), for various reasons: snowstorms, rainstorms, and, mostly, “air traffic control,” especially on a Friday when all business travelers rush to go home. On top of these “normal” reasons, Expo 2010 strained the aviation industry, and Shanghai’s Hongqiao Terminal 2 didn’t open until March 16, 2010. There were no high-speed G trains yet, either.

I still remember once flying back from Shanghai to Beijing — guess on which airline? — and being told to go to my gate to wait for the new departure time. After changing gates, the plane finally arrived from Beijing, one and a half hours late. One and a half hours later, we boarded. An hour later, we were still on the tarmac, and then, finally, eventually, mercifully, told to get off the plane. Mechanical failure. By that point, travelers were so angry that they had to give us food, drinks and RMB 200 each (score! cash!). I don’t remember what time we eventually took off, but it was well over midnight, and I wasn’t back in Beijing till 2 or 3 am.

Avoid night flights between Beijing and Shanghai. Got it.

The recent downpours in Beijing have been affecting planes. No, not because the acid is burning through the wings. Rain creates flight delays that bring to mind the snaking lines at the bus stop, the bank, and the bathroom. However, none of those can compete with a day at the Beijing Capital Airport when rain is afoot.

During a heavy rain the night before my trip, I learn that my flight to Erlian is delayed two hours.

In the morning, I find that the crusty vestige of the original Beijing airport called Terminal 1 is not my favorite place.

From the grand hall of Terminal 2 to the squished space of Terminal 1, problems abound. The damn voice broadcasting over the P.A. keeps saying so. Self check-in is an elbow to the rib waiting to happen so I make my way to the counter, and the process is quicker than expected, and my departure time is still set for 9:30 AM [laugh track].

The information screens, steps from the wand-wielding security personnel, are lacking in helpful numbers. Passengers build into a thick human clog and look upon the screens as though they might soon reveal the meaning of life. Craned necks, and shuffling feet – can’t be much longer. Now it can’t be much longer. Okay, now? I judge it time to venture off to the restroom with the knowledge that a watched pot never provides gate information.

The women’s bathroom and the expected line.

Passing security and airline representatives are not only unhelpful but downright disdainful towards those who dare to ask for more information.

Screens part three. Why can’t they just tell us to go to a made-up gate?

I head off to find the poor soul who drew the short straw at the info desk, but as I approach him – FINALLY a gate number appears! Leaving… several hours from now. Fine.

Being a vegetarian in this terminal means that I am reduced to some packaged faux peanut butter faux chocolate cookies and banana milk to appease my gurgling stomach. And the waiting continues.

I contemplate the strange five-minute trip across to Mongolia that I still have ahead of me, and then – HOORAH, another line forms, this time to board the plane!

My day is starting to look up when I find myself alone in my row, and I drift off. I wake up almost an hour later and find my ass still planted firmly on the tarmac. Apparently, we are in yet another line, this one consisting of planes.

The engines do finally rev, and the flight attendant announces our happy departure. Less than an hour after that we touch down and emerge into a scorching hot, sunny day. Irony flies Hainan Airlines apparently.

NO ONE KNOWS ANYTHING.

And finally, the most nightmarish story of them all, via Andray Abrahamian, Korean scholar, Choson Exchange writer:

Me: have any horror stories from chinese flights?

Andray: Sitting on a plane in the tarmac while Murray was winning wimbledon…my country’s seminal sporting event of probably this century

I mean, they knew the storm was coming. Let us sit and watch sports history unfold in the terminal instead of spending almost three hours on the tarmac with only Yanjing beer for comfort as howling winds and rain lash the plane.

Air China loves to cancel their flight to PY [Pyongyang] without warning. You’ll get there and then they say, sorry, there is two much wind in PY, we can fly. Or there is a blizzard. You get there the next day and there is no snow.

Me: Did you get the game any way? Following on iPhone? Radio?

Andray: I followed the game via texts and calls to Tori, who was watching with a pack of expat Brits.

Boarded after the first set, took off after he’d won.

Chinese airports are the worst.

5 Responses to “Confirmed: Beijing And Shanghai Airports Are World’s Worst For Delays”