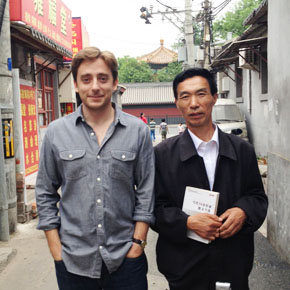 China watchers already know this, but longtime China correspondent Evan Osnos, who has written for the New Yorker since 2008, has moved back to the United States. “A Billion Stories,” published Friday in the best China blog in the business, amounts to his farewell, and it’s a typical Osnos piece: descriptive and instructive, poetically constructed from graf to graf, perfectly allusive in the way that the world sometimes is, and keenly humanizing.

When I moved to Beijing, in 2005, to write, I was accustomed to hearing the story of China’s transformation told in vast, sweeping strokes—involving one fifth of humanity, and great pivots of politics and economics. But, over the next eight years, some of the deepest changes in the lives around me have been intimate and perceptual, buried in daily rhythms that are easy to overlook. A generation ago, foreigners writing about China marvelled most at the sameness of it all. Chairman Mao was the “Emperor of the Blue Ants,” as a memorable book title had it. But in my years in China, I have been seized most of all by the sense that the national narrative, once an ensemble performance, is splintering into a billion stories.

Living in China at this moment, the stories bombard you with such fantastical vividness that you can’t help but write them down and hope to make sense of them later. Writing about China, in The New Yorker, for the past five years, I’ve tried to capture something of this age, to grab a few of these stories out of the air before they slip by. The complexities of individual lives blunt the impulse to impose a neat logic on them, and nobody who stays here for some time remains certain about too much for too long. To impose order on the changes, we seek refuge, of a kind, in statistics. In my years here, the number of airline passengers nationwide doubled; sales of personal computers and cell phones tripled. The length of the Beijing subway quadrupled. But the longer I stayed, the less those impressed me than the dramas that I could never quantify at all.

Go read all of it, then comb through his archives. The first Osnos piece I ever encountered in the New Yorker, “Angry Youth,” remains one of the finest examples of how journalism can deepen understanding and inspire the desire to learn more. And here, too, a gentle reminder that while there will always be room for skepticism and anger and all the precipitate emotions from wanting a place to be better, because the possibility is there, we would do well to be tolerant of the ambitions and daily striving and foibles of those around us, that characterize us all. Because in China, at this current juncture in history, you never know what tomorrow will bring, which is why we stay.