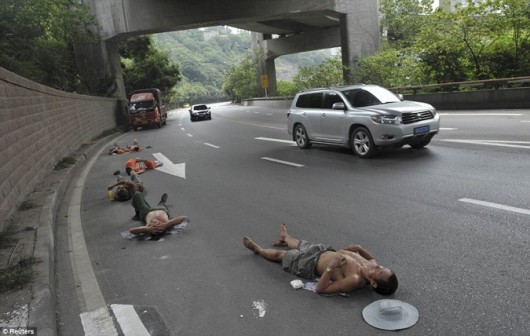 Black Sun, which was nominated for a BJC Bar and Club Award in the category of “Place That Opened Before the Olympics That, Against All Odds, is Still Open,” will soon no longer be open; find out more within these links.

His documentary on this subject is also done — we’ll have more about it later. “Almost exactly a year earlier, Liu Liqin had the worst day of his life. He was out on a temporary construction job, looking forward to lunch and his next cigarette break, when his wife called to tell him that their two-year-old son Liu Jingjun was missing. Liu rushed home and began a frantic but fruitless search for the boy. He and his wife called relatives, ran to the local police station to report Jingjun missing, and then fanned out through their city neighborhood calling the boy’s name and asking passers-by if they had seen anything. The police told him they couldn’t take the case because not enough time had passed since the boy had disappeared. Finally, late in the evening, Liu thought to check the footage from a surveillance camera at a building on the street outside his family’s apartment. Sure enough, when the video footage was queued up, in a small corner of the frame, Liu could see a man, face obscured, carrying little Jingjun down the narrow alley where the Liu family lives.” (Charlie Custer, ChinaFile)

You’re fired. “KTVU-TV has dismissed at least three veteran producers over the on-air gaffe involving the fake names of those Asiana airline pilots that became an instant YouTube hit – and a major embarrassment to the station.” (SF Chronicle)

Bo Xilai back in the news. “The trial of disgraced Chinese politician Bo Xilai could begin this week, a source with direct knowledge of the matter said on Wednesday, marking the beginning of the end of China’s most sensational scandal in decades.” (Reuters)

Corollary: What’s it really about? (ChinaFile)

China’s got its eyes on Detroit. “But some look at Detroit’s hard times and see profit. // Specifically, bargain-hunting Chinese investors. Since the bankruptcy was announced on July 18, talk of snapping up Detroit housing for a pittance has picked up on Sina Weibo (link in Chinese), reports Sina Finance. And it appears to be translating into real interest; Caroline Chen, a real estate broker in Troy, Michigan, says she’s received ‘tons of calls’ from people in mainland China.” (Quartz)

A documentary set in Yiwu? Bulkland. “We first visited Yiwu almost three years ago and after stepping off the train and seeing the peasants burning tyres near the airport, brand new Mercedes sportscars with boxes of merchandise haphazardly tied to them and the modern glistening Arab quarter full of men sipping tea and smoking pipes we immediately fell in love with the town and knew we had to tell it’s story. Now you can help us do that. // Your donations will help us get to China to shoot the film in September of this year.” (Daniel Whelan and Tobias Andersson Åkerblom, Indiegogo)

Passing the buck, defined. “Andrew Witty, the chief executive of Britain’s biggest drug company, GlaxoSmithKline (GSK), said yesterday that much of the blame for the investigation of his company on the mainland appeared to rest on senior Chinese executives. // ‘We have been told by the Chinese authorities that it appears certain senior Chinese executives [of GSK] appear to have broken Chinese laws and defrauded the company and the Chinese health-care system,’ Witty told a press conference in London. ‘This appears to involve individuals working outside GSK’s controls and acting inappropriately in the market.’” (SCMP)

One way to get someone to move. “Developers in Shandong province have come up with a novel way of dealing with those stubborn ‘nail house’ residents, just abduct them in their sleep. // A man surnamed Li has been arrested on suspicion of masterminding a scheme to abduct Zhang Shiqiang and his wife Cui Shemei and illegally demolishing their home. The couple were snatched by masked men while they slept on May 28, after which workers destroyed their home, along with possessions worth an estimated 500,000 yuan.” (Shanghaiist)

Ew. “After several months of ‘headaches, convulsions, and even fainting’, a 60 year old man checked himself into the First People’s Hospital of Shuangliu county, Chengdu. According to the Southern Metro Daily, doctors found a 15 cm long worm in his brain.” (Shanghaiist)

Bentley and other expensive cars interlude, via DRIVE:

“I spent an entire day on the Beijing subway.” (Vice)

Goodbye to Black Sun, who’ve had a hell of a run. Blowout party tonight! (the Beijinger)

Despicable Me 2 won’t be coming to China. (the Beijinger)