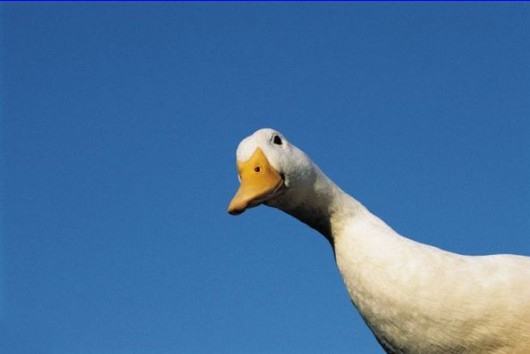 Geese are apparently being used to help law enforcement officers in Xinjiang, according to People’s Daily. We’re tempted to make a chengguan joke here, but we’ll refrain.

The Telegraph has the full report for you, which you should read here. We’re going to isolate the quotes from the article, because taken together, they provide a lesson in ridiculousness.

“Among all poultry, geese [are known] for being extremely vigilant and having excellent hearing,” Zhang Quansheng, a police chief in Xinjiang’s Shawan county, told the newspaper.

Geese are “sharp, keen and brave” animals being “actively promoted” across the region.

“Geese are very brave. They spread their wings and will attack any strangers entering [someone’s] home,” said Mr Zhang, the local police chief… “A radar that does not need power.”

“In some ways, they are more useful than dogs. A household normally keeps one dog [but] an intruder can throw a drugged bun to kill the dog. Geese are normally kept in groups and they have poor eyesight at night making it very difficult for intruders to [poison them].”

In June, one gaggle of police geese reportedly managed to snare a man who had broken into the local police headquarters to take a motorbike, the People’s Daily reported.

After drugging two police dogs and climbing over the wall, the man was about to make his getaway when he came face-to-face with some 20 feathered “gatekeepers.”

“The geese fanned their wings and began shrieking when they saw the stranger. The duty officer woke up and the thief was caught red handed.”

Now you know. Don’t steal motorbikes from police headquarters that keep geese. Also, eat your heart out, you.

4 Responses to “Geese Are Helping Fight Crime In Xinjiang, Apparently”