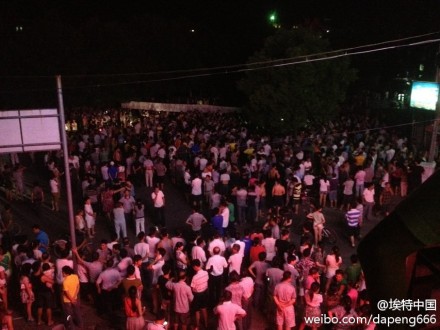 The death of a watermelon farmer in Chenzhou City, Linwu county, Hunan province attracted the attention of authorities because of the suspicious nature of his death — beaten, it seemed. But after an investigation, authorities concluded that chengguan did not have a role in the man’s death, a result that enraged the farmer’s family.

Kin, neighbors and townsfolk gathered for a late-night protest yesterday. According to Sina Weibo user @dapeng666, officials responded by cutting off all the streetlights. The move was, perhaps, to also prevent people from filming or taking pictures.

What will the morning bring? Stay tuned.

Meanwhile in Kunming, a street peddler was spotted blocking Haiming Road on July 13, leading to an argument with chengguan. While this was happening, according to eyewitnesses, bystanders began taking pictures and video, which the chengguan did not like. A confrontation followed, leading to a brawl that caused about a dozen people to sustain injuries. The peddler’s food cart got it pretty bad, too: 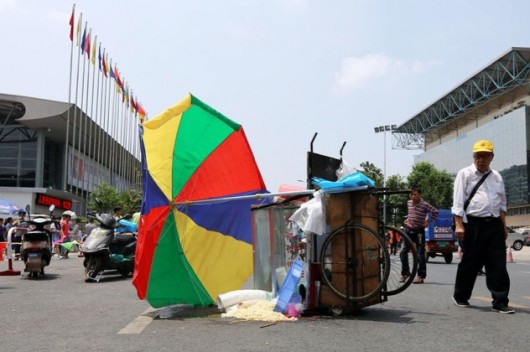 Chengguan have not had a good week. One more example forthcoming in a few hours. Update: here’s what we mean.

The [Sina Weibo] blast said the husband of a couple, who sold watermelon near a bridge, died after he had a dispute with the Chengguan. Witness said the husband was beaten in the head by an iron weight during the brawl.

The families of the victim fought against the government officials who planned to loot the vendor’s corpse, which attracted crowd of onlookers.

“The government dispatched over 200 armed police and finally snatched the corpse,” a reporter with CCTV revealed on his Sina Weibo.

Looting a corpse, yes, would be a new low. 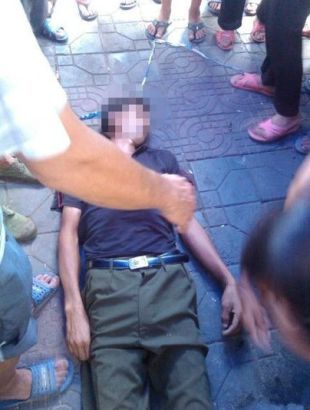