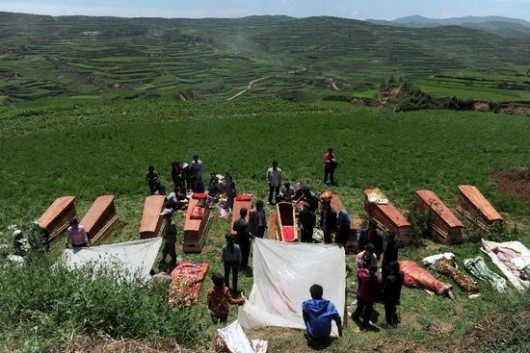 Burying the dead in Gansu, via Sina

Beijing airport bomber separated from family by authorities. “The wheelchair-bound petitioner who detonated a home-made bomb in protest at Beijing’s international airport on Saturday is under criminal detention, mainland media report, while his family say they have lost contact with him. // ‘My brother was so miserable with his injustices, and now, we don’t know where he is and what he was arrested for,’ Ji Zhongji, elder brother of bomber Ji Zhongxing, told the Post yesterday.” (SCMP)

Corollary: “Why a Reporter Feels Sympathy for an Airport Bomber” — herein, a story of a miner that’s more or less a must-read. (Caixin)

I’ve come to accept that I’ve eaten rat here. “An incident of poisoning in Beijing has been traced to yangrou chuanr, the ubiquitous lamb skewers sold on streets, in what could be more proof that rat, dog and cat meat are being widely used among street hawkers. // Beijing hospital No 307, which is affiliated with the Academy of Military Medical Sciences of the People’s Liberation Army, found traces of bromadiolone in a blood sample of a 20-year-old tourist from northeastern China.” (SCMP)

Foreigners in jail. “A fascinating report on Dongguan’s prison system in The Daily Sunshine has claimed that of the 5,000 inmates in the jail on Xinzhou Island in Dongguan’s Shijie Village, there are 500 foreign nationals from 53 countries, as well as some people with no nationality. Most of them are there for drug-related crimes.” (The Nanfang)

Lucky woman. “A lucky escape: Woman, 33, survives being buried under ton of rice for an hour after lorry carrying sacks topples over.” (Daily Mail)

New post today! On leaving China and not writing about it- We're Not in the Middle Kingdom Anymore, Toto… http://t.co/paZoGG20yV

Cake deliveries by #drones in Shanghai http://t.co/AzczkXum3O (via @SpankyMcChubbs) <<< I hope this cake delivery isn't a lie.

@beijingcream Correction: "chuanr," not "chuan'r." 儿 is nonsyllabic. Please let me leave Beijing believing that I have fixed this.