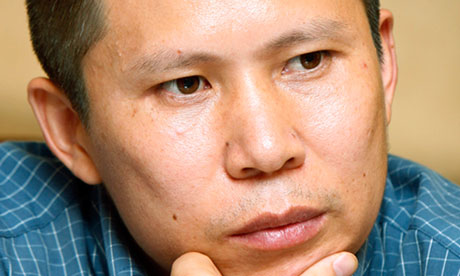 The arrest of lawyer Xu Zhiyong on July 16 has prompted a “protest letter” with more than 400 signees. Hong Kong-based China Media Project has published a copy of the letter and translated its five demands:

1. That Xu Zhiyong and all citizens who have been detained for taking part in the New Citizen’s Movement be released without charge.
2. That the legal rights of the above-mentioned persons are fully protected while they are under detention and arrest.
3. That restrictions and bans on the internet and the media be lifted, allowing media to freely report, ensuring that the people’s right to know in the Xu Zhiyong case is protected, that government conduct is out in the open, transparent and subject to the scrutiny of society.
4. The government authorities must, using the Xu Zhiyong case as a mirror, must engage in deep reflection, adjusting its policies, creating a tolerant and favorable environment for the healthy development of civil society.
5. The unbridled repression of Xu Zhiyong and the New Citizen’s Movement not only damages rule of law and infringes on human rights, but also does serious damage to national prestige and has a pronounced harmful impact on society — therefore, relevant [government] agencies and responsible persons must be held legally responsible for these actions.

For further reading, we highly recommend Jeffrey Wasserstrom’s recent piece in Time, in which he condemns president Xi Jinping for Xu’s arrest and mocks the idea of a “reformist Chinese leader.”

The Pew figures show just how much the ground has shifted. Four years ago, a third of the Americans surveyed (33%) were already saying they believed China already was or soon would be the world’s leading superpower, but now almost half claim to think so (47%). In Britain, meanwhile, the 2009 to 2013 numbers went from 49% to 66%.

The Xu story, by contrast, points to lack of change rather than transformation. Reports about his latest detention read almost word for word like those written when he was arrested a few years ago, when Hu Jintao rather than Xi Jinping was China’s President.”

Leave a Reply to @GwakamolieGreen