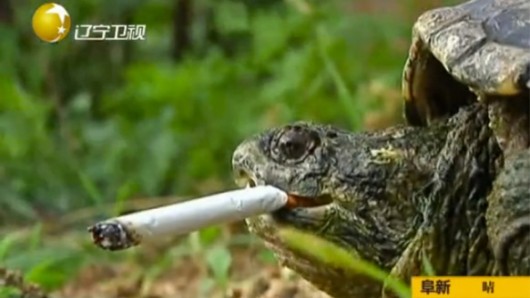 Smoking turtle in Changchun, via Kotaku

A mighty hello to those of you returning from North Korea. Catch up with links.

Bad people to beat up: police. “A policeman has been beaten up in Qinghai province by a group of men, sparking outrage in the latest episode of violence by the notorious urban management force or ‘chengguan.’ // Ren Jie, a policeman in Xining, the provincial capital, suffered injuries to his head when a group of chengguan beat him with his own police baton on Tuesday.” (SCMP)

Bo Guagua still chugging along. “Bo Guagua, the son of disgraced former Chongqing party secretary Bo Xilai, appears to be enrolled in the prestigious Columbia Law School at Columbia University, according to public records available on the school’s website.” (SCMP)

Looking for someone to blame for flight delays? “The military is responsible for 7 percent of flight delays in China, national aviation authorities said at the weekend. // The officials were responding to widespread complaints about domestic flight delays as the average punctuality rate at 35 domestic airports dropped to its lowest in five years at 74.8 percent last year, the Civil Aviation Administration of China said.” (Shanghai Daily)

Woman jilted and all. “As President Xi Jinping pledges to clean up government corruption in China, an unlikely group of self-styled whistleblowers has emerged: jilted mistresses. // The latest is a 26-year-old named Ji Yingnan, who says she discovered at the end of last year that her fiance, a powerful Communist Party official in Beijing, had been married with a teenage son the entire time they were together.” (Washington Post)

Good? “Television singing contests have been curtailed by Chinese censors who claim the country has too many of the American Idol-style shows. // The country’s state broadcasting regulator issued a new policy Friday banning satellite channels from producing any more singing contests.” (MSBNC)

Congratulations to Sun Yang, swimmer extraordinaire. “Sun Yang won his first gold medal of the 2013 World Swimming Championships when he claimed the gold medal in the men’s 400 meter freestyle on Sunday.” (Sina)

Results from the 1st Beijing class; Alex didn't make it to class the next day and Jack puked 6x. Takeaway? No more tequila for students.

7 year old bot in hubei molested by teacher for half a year, gets an std 湖北武穴7岁男童疑遭老师性侵半年 患上性病 http://t.co/rbsXvxyj10

A video of the little panda that was recently born in #Taipei. Look how big he is already. You can follow Taipei… http://t.co/qrAX6Er3z7

The Last Hutongs of Beijing interlude, a crowdfunding project by Jojje Olsson:

“Mental Illness in the Middle Kingdom: How Is China Facing Issues of Coping, Care, and Integration?” (Tea Leaf Nation)

“China’s ‘New Kind of Terrorism’ is Winning Hearts and Minds.” (The Diplomat)

“Only in Beijing: Three Cocktails Unique to the Capital.” (the Beijinger)

Belated, but an important Chinese soccer story on hooligans. (World of Chinese)