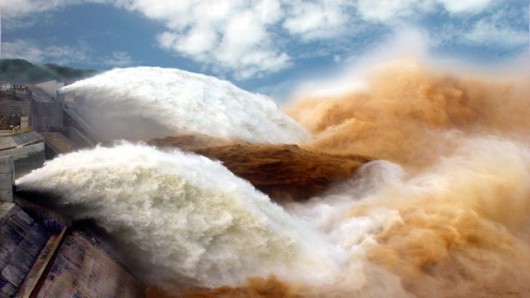 Earthquake in Gansu province. “At least 47 people have been killed and 296 others injured in an earthquake which hit a juncture region of two counties in Northwest China’s Gansu Province Monday morning, local authorities said. // The 6.6-magnitude quake occurred at 7:45 am at the junction of the Minxian county and Zhangxian county, the Gansu Provincial Seismological Bureau said.” (Global Times)

Construction has started on world’s tallest building. “A groundbreaking ceremony was held in Changsha, Hunan Province on Saturday for a building that is intended to set a new record for the world’s tallest. // When complete, Sky City, designed by the Chinese firm Broad Sustainable Building (BSB), will be the tallest building in the world, with 202 floors above ground and a total height of 838 meters, making it taller than the 162-story Burj Khalifa in Dubai by 10 meters, currently the tallest building in the world, the Changsha-based Xiaoxiang Morning Herald reported.” (Global Times)

Chinese economy needs “rebalancing.” “Yet the signs are now unmistakable: China is in big trouble. We’re not talking about some minor setback along the way, but something more fundamental. The country’s whole way of doing business, the economic system that has driven three decades of incredible growth, has reached its limits. You could say that the Chinese model is about to hit its Great Wall, and the only question now is just how bad the crash will be.” (Paul Krugman, NY Times)

Income gap. “Results of a wide-ranging survey of Chinese family wealth and living habits released this week by Peking University show a wide gap in income between the nation’s top earners and those at the bottom, and a vast difference between earners in top-tier coastal cities and those in interior provinces. // The survey found that in 2012, the households in the top 5 percent income bracket earned 23 percent of China’s total household income. The households in the lowest 5 percent accounted for just 0.1 percent of total income.” (NY Times)

Yunnan flooding. “Torrential rains and flash flooding in Kunming have caused an estimated 84 million yuan (US$13.6 million) in damage to the city. Floodwaters have destroyed real estate and at least one person is missing, according to a report by the Yunnan Provincial Department of Civil Affairs.” (Go Kunming)

Woman's stomach "bursts like a balloon" after drinking too much cola http://t.co/4tGLDmpHoe @shanghaiist @beijingcream

吃“羊肉串”吃出全身瘀血斑 － http://t.co/tk9yCeBtup man gets hematoma after eating "lamb" kebab in Beijing, meat may have come from poisoned rats

How to avoid being a leftover woman song, by Kevin McGeary interlude: